The General Theory
of Relativity by Albert Einstein

Steel grey edition,
$180 $
Die Grundlage der Allgemeinen Relativitätstheorie
The manuscript is in German
The foreword is in English

The General Theory of Relativity, the manuscript

This hard-bound, slip-cased volume is the first-ever reproduction in manuscript form of Albert Einstein’s ‘Die Grundlage der Allgemeinen Relativitätstheorie’ (‘The basis of the general theory of relativity’). It has been digitally enhanced and restored and is introduced with an essay by Professor Hanoch Gutfreund, the director of the Albert Einstein Archives at the Hebrew University of Jerusalem. The essay is printed in three languages: English, French and German.

The manuscript which would overturn the understanding of modern physics

On 25 November 1915, Albert Einstein presented a paper entitled ‘Die Grundlage der Allgemeinen Relativitätstheorie’ to the Royal Prussian Academy of Sciences. Published in the prestigious journal Annalen der Physik on 11 May 1916, this 46-page document was the culmination of ten years of intensive research by Einstein to generalize his Special Theory of Relativity which he had formulated in 1905. The result was the General Theory which altered our whole understanding of modern physics. 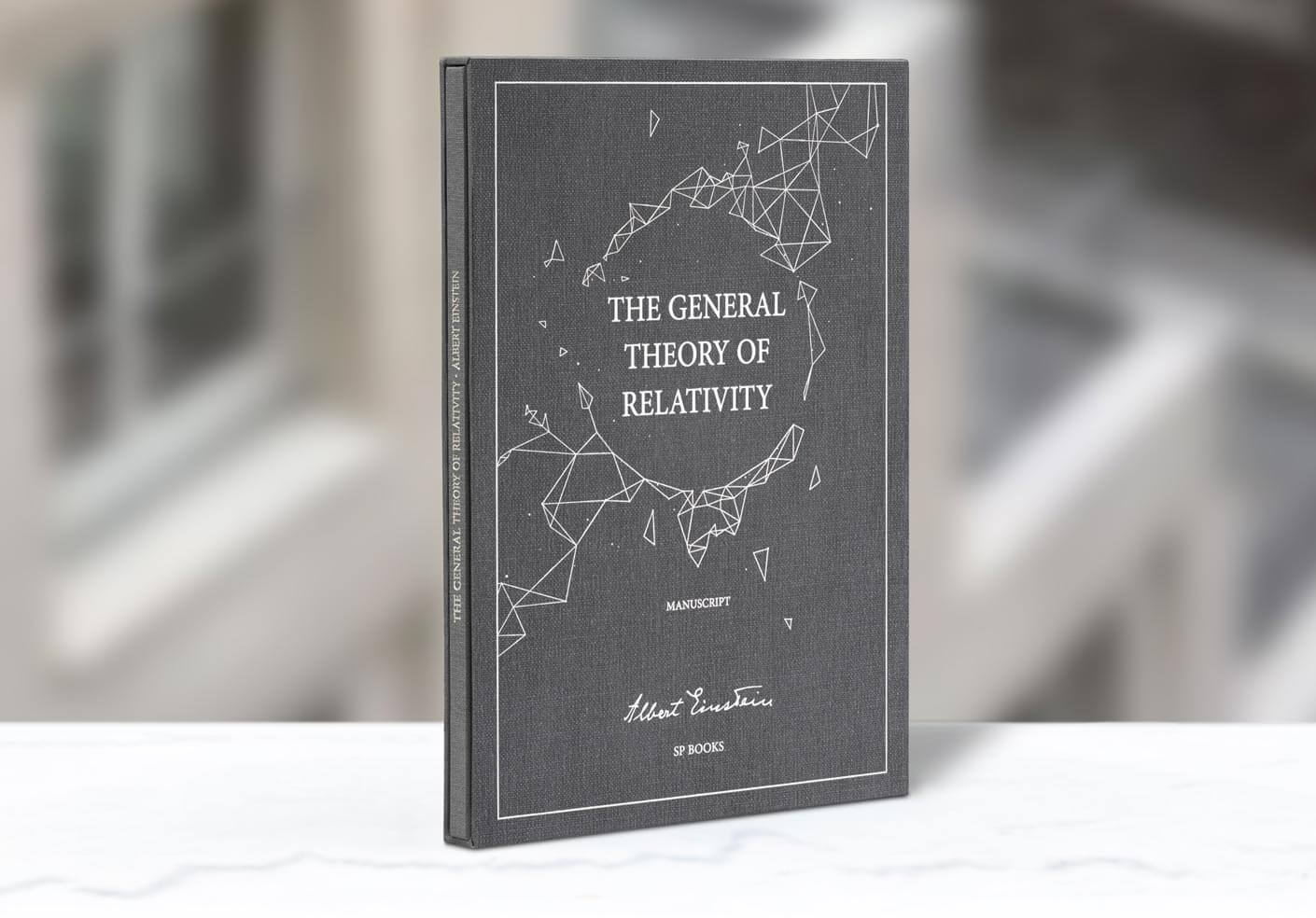 In his 1916 article Einstein introduced for the first time the idea of a gravitational field equation which was to become the keystone of his Theory and made three major predictions: the bending of light rays when influenced by the gravitational field of a massive body; gravitational redshift; and an explanation for the perihelion advance of the planet Mercury. In 1919, just three years after the publication of his General Theory, observations taken during a total eclipse of the sun confirmed his prediction about the effect of gravitation on light rays making Einstein an international scientific celebrity overnight.

In 2016 scientists world-wide confirmed for the first time the existence of gravitational waves resulting from the collision of two black holes. This observation, made much earlier than physicists had hoped, validated yet again Einstein’s equations of 1916. 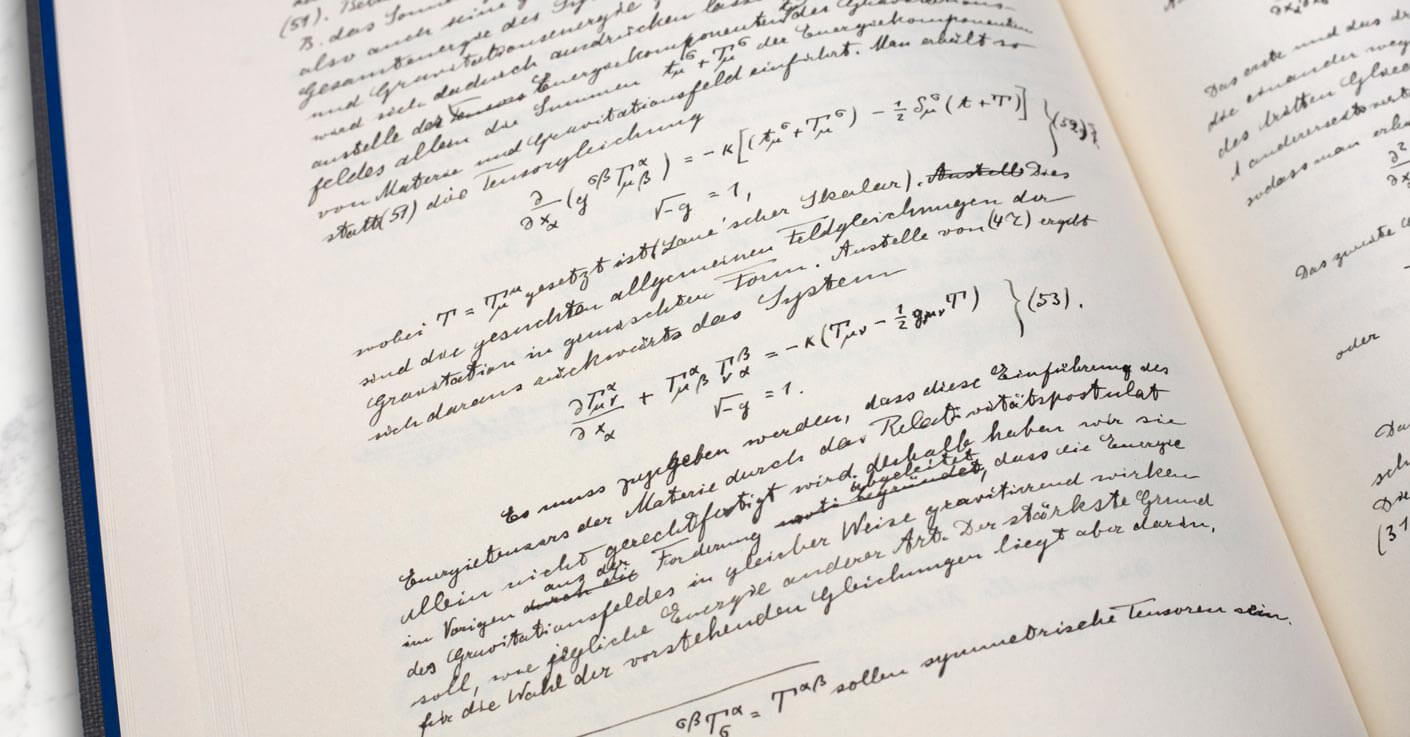 In his preface to this volume [click here] Professor Hanoch Gutfreund, the director of the Albert Einstein Archives at the Hebrew University of Jerusalem, tells the extraordinary story behind Einstein’s convoluted intellectual odyssey toward the General Theory of Relativity. The outcome of it was to be this manuscript which would radically change our view of the universe and help pave the way to modern technology. 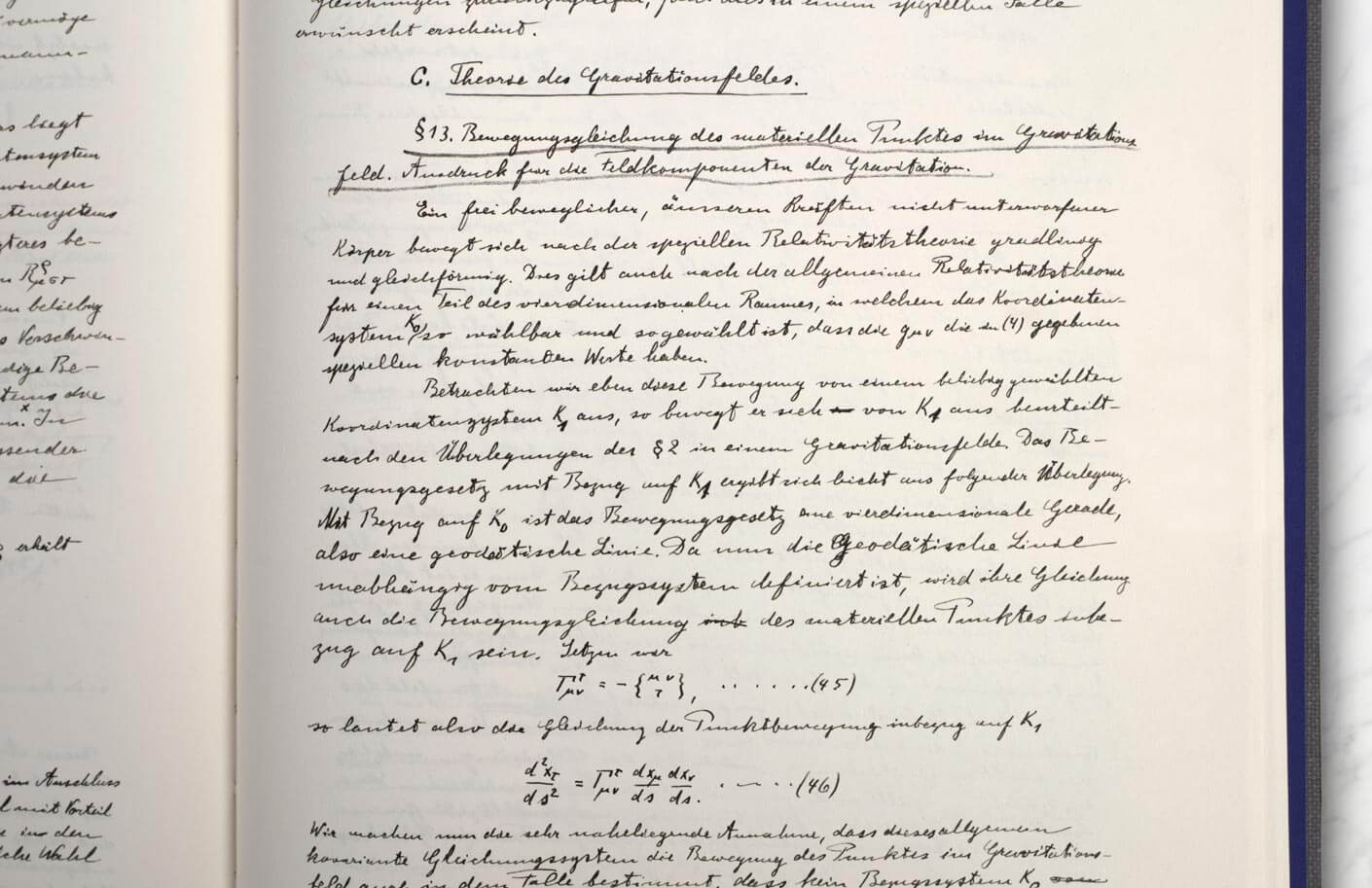 The charmed life of a manuscript

It is a near-miracle that this document should have survived at all as Einstein was in the habit of destroying his working papers once they had appeared in book or manuscript form. For just this reason none of his manuscripts has survived from his annus mirabilis 1905 when he published his groundbreaking work on the Special Theory of Relativity. A manuscript version of his article ‘On the electrodynamics of moving bodies’ (1905) does indeed exist and is preserved in the Library of Congress, but it is a fair copy written out by Einstein in 1944 and sold at auction as his contribution to the American war effort.

The original manuscript from 1916 did survive, however, which makes it all the more exceptional. Einstein first offered it to a friend and colleague, Erwin Finlay-Freundlich, but later asked for its return when relations between the two men deteriorated in 1921. He then asked the industrialist and philosopher of science, Paul Oppenheim to sell it for the benefit of the newly founded Hebrew University in Jerusalem but Oppenheim, as a friend of both Freundlich and Einstein, turned down the commission. It was thanks to Elsa, Einstein’s wife, that the manuscript was eventually offered to the Hebrew University with 2000 Marks to be paid to support the research work of Prof. Freundlich and 400 marks to Mrs Einstein’s charities.

The first complete facsimile of the restored manuscript

Einstein’s manuscript has been preserved in the archives of the Hebrew University since its inauguration on 1 April 1925. It is regarded as one of the jewels of the collection and has only once been on public exhibition in 2011 when it attracted crowds of fascinated visitors. It is the first time that this document of supreme scientific importance has been reproduced in printed form and with the manuscript pages enhanced by our team of specialised graphic artists. The effect has been to restore its pages as near as possible to their original state, as if the ink were barely dry on the paper. There are some interesting variations from the article in Annalen der Physik and it reveals clearly all the last minute corrections made by one of the greatest scientists of the 20th century as he perfected his General Theory of Relativity. 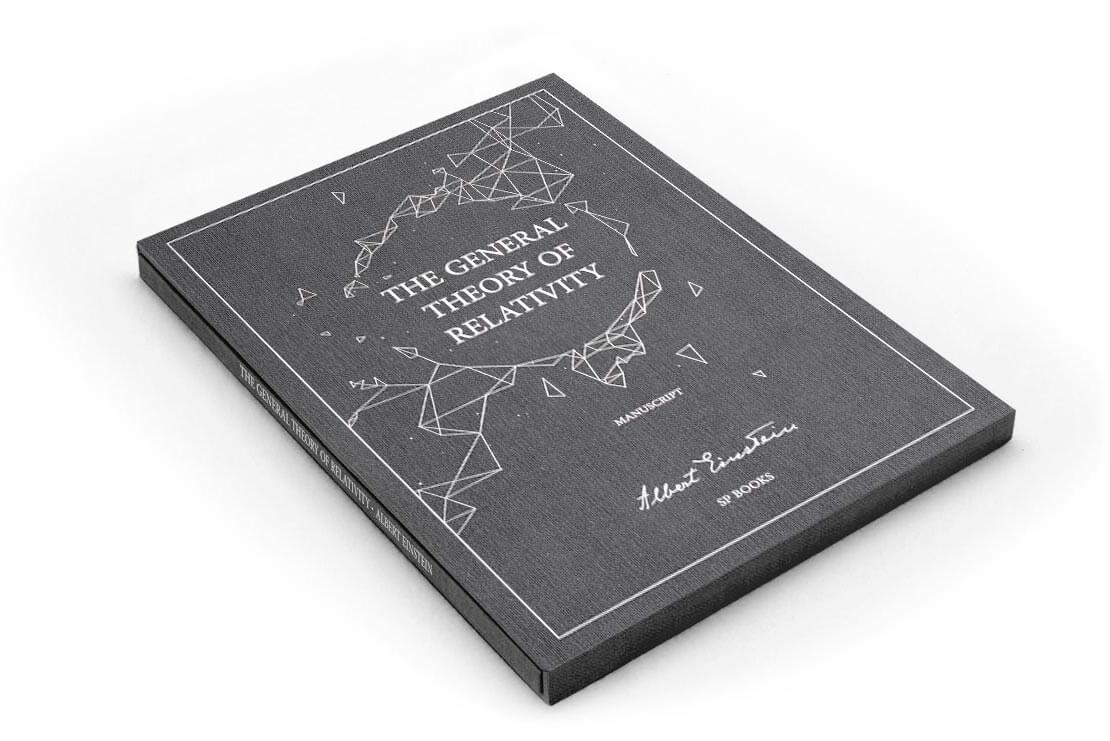 This Steel grey edition is presented in a large format handmade slipcase.

This Steel grey edition is presented
in a large format handmade slipcase.

I am thrilled to have the copy #571 of the magna carta of modern phisics. Delivery is on range estimated time. Well packed. The book is beautiful.

I am the happy owner of the number 243 of this wonderful reproduction of Einstein's text. It was my Christmas' gift made by my son. I must say that it is a PERFECT, aesthetic and very well done work. It's simply a masterpiece, a treasure of the world of edition…