This volume is the first-ever reproduction in manuscript form of Oliver Twist.

Of all of Charles Dickens’s novels, Oliver Twist remains “among the best loved and indeed most read”, so insists famed actor and Dickens enthusiast Simon Callow.

The original manuscript of the novel, which appeared in 33 monthly installments between 1837 and 1839, has never before been reproduced in printed form. With this manuscript, all 474 folios – the only ones that survived after the author’s death – are finally presented to the public in a deluxe edition.

In this work, the pages formerly worked on by Charles Dickens are reproduced in a graphically-restored version, accompanied by George Cruikshank’s iconic illustrations and prefaced with a foreword by Simon Callow. More than mere relics, they are a living testimony to the development of the narrative and to Dickens’s success. The serialised novel form imposes tight constraints on the writer, as it asks him to leave the reader in suspense at the end of every chapter while maintaining a coherent plot, all without the possibility of going back to make corrections. Is it possible that the creator of Oliver Twist, David Copperfield and Scrooge also pioneered the cliffhanger?

This edition was produced in collaboration with the prestigious Victoria and Albert Museum (V&A) in London, where the original manuscripts are housed within the Forster collection.

The Charles Dickens Museum, located at 48 Doughty Street, in the house where the writer lived during the two years he wrote Oliver Twist (1837-1839), also provided a handwritten page from Chapter 10 of the novel bearing the inscription “original manuscript of Oliver Twist”. 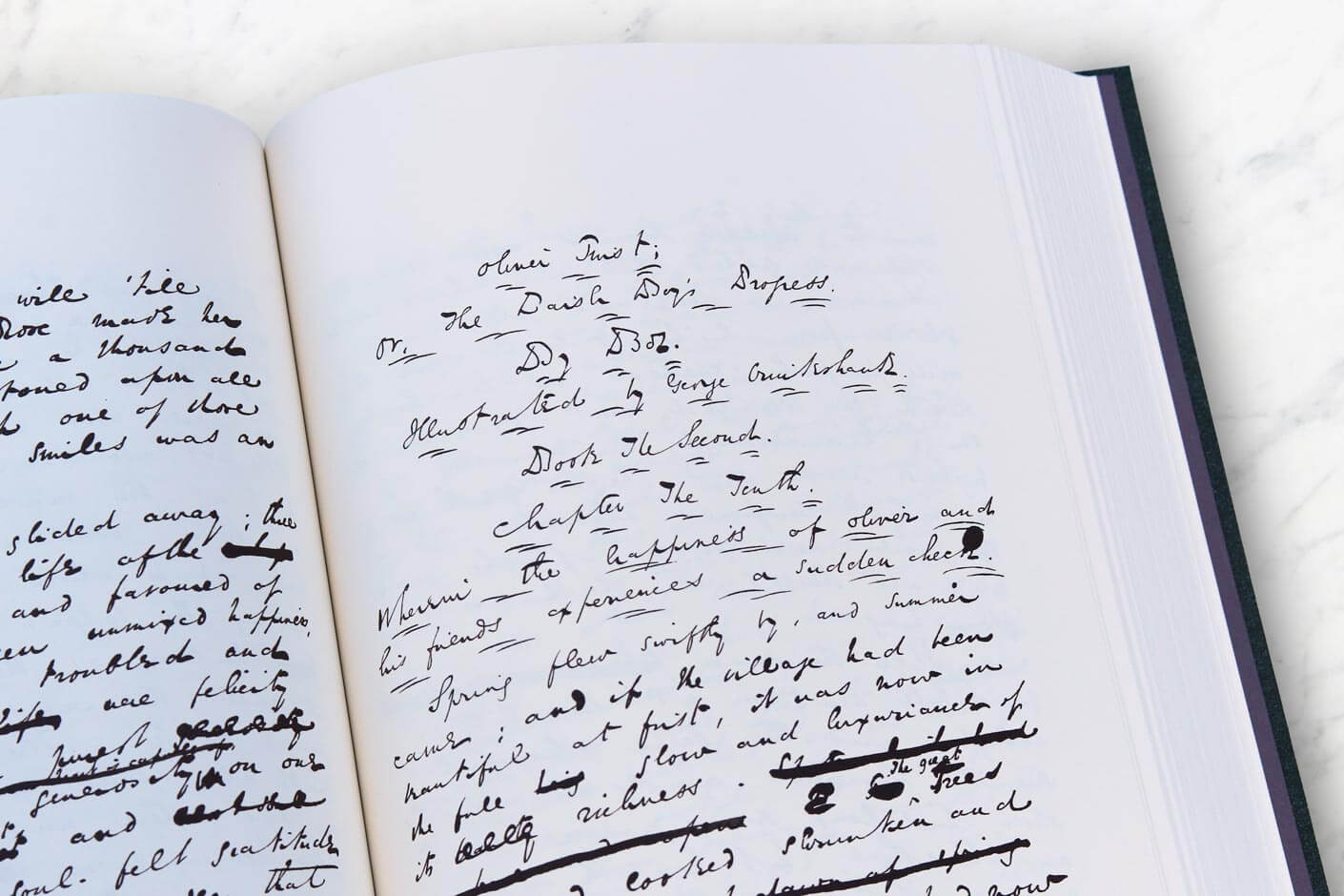 Charles Dickens: “I have thrown my whole heart and soul into Oliver Twist”

“I have perhaps the best subject I ever thought of . . . I have thrown my whole heart and soul into Oliver Twist, and most confidently believe he will make a feature in the work, and be very popular . . . ”

When Charles Dickens wrote these lines at the beginning of 1837, the first two chapters of Oliver Twist had just appeared in the pages of Bentley’s Miscellany, a new literary magazine founded by Richard Bentley, of which Dickens had just been named editor. Aged only 25, the young writer had already tasted success with his first novel, The Posthumous Papers of the Pickwick Club. Likewise, it seemed he was already beginning to sense that his young orphaned hero, Oliver Twist, would become a star.

From the moment the first two chapters were published, the adventures of Oliver Twist, illustrated with etchings by George Cruikshank, were met with great success: the February issue of Bentley’s Miscellany had to be reprinted with an additional 1,000 copies. The following chapters, always accompanied by Cruikshank’s illustrations, followed in monthly installments until April 1839, as the young boy’s popularity – the first boy in English literature to be cast as the hero in a novel – soared rapidly. Dickens was on the verge of becoming one of England’s most famous writers. 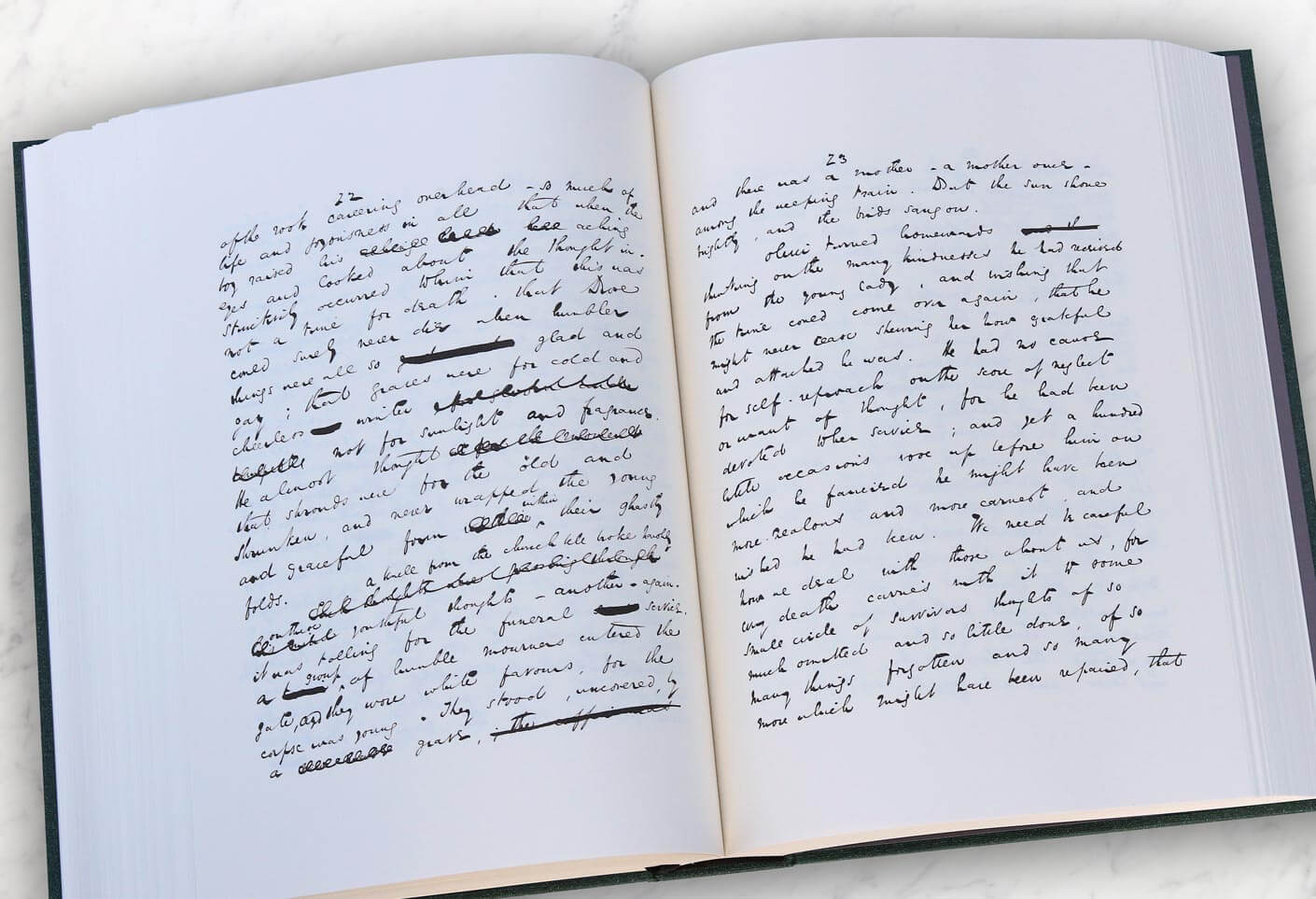 In 1841, some years after the first chapters of Oliver Twist were published, the novel was entrusted to another publisher, Chapman and Hall. In 1846, Dickens released a reworked version of the novel in a new serial publication, this time by Bradbury & Evans, followed by the one-volume edition in which the novel found its final form.

Dickens’s novel continued to evolve with each publication. Between the original manuscripts composed from 1837 to 1839 and the 1846 edition – often considered the definitive version – the text passed through the hands of three publishers and was corrected at least four times, Dickens having continued to make changes throughout.

These manuscripts immerse the reader in the first version of a text that was to develop over the course of a decade. For instance, the corrupt criminal known as “Fagin” was originally named “Bob Fagin”, the full name of a man Charles Dickens met working in a shoe polish factory at the age of twelve. 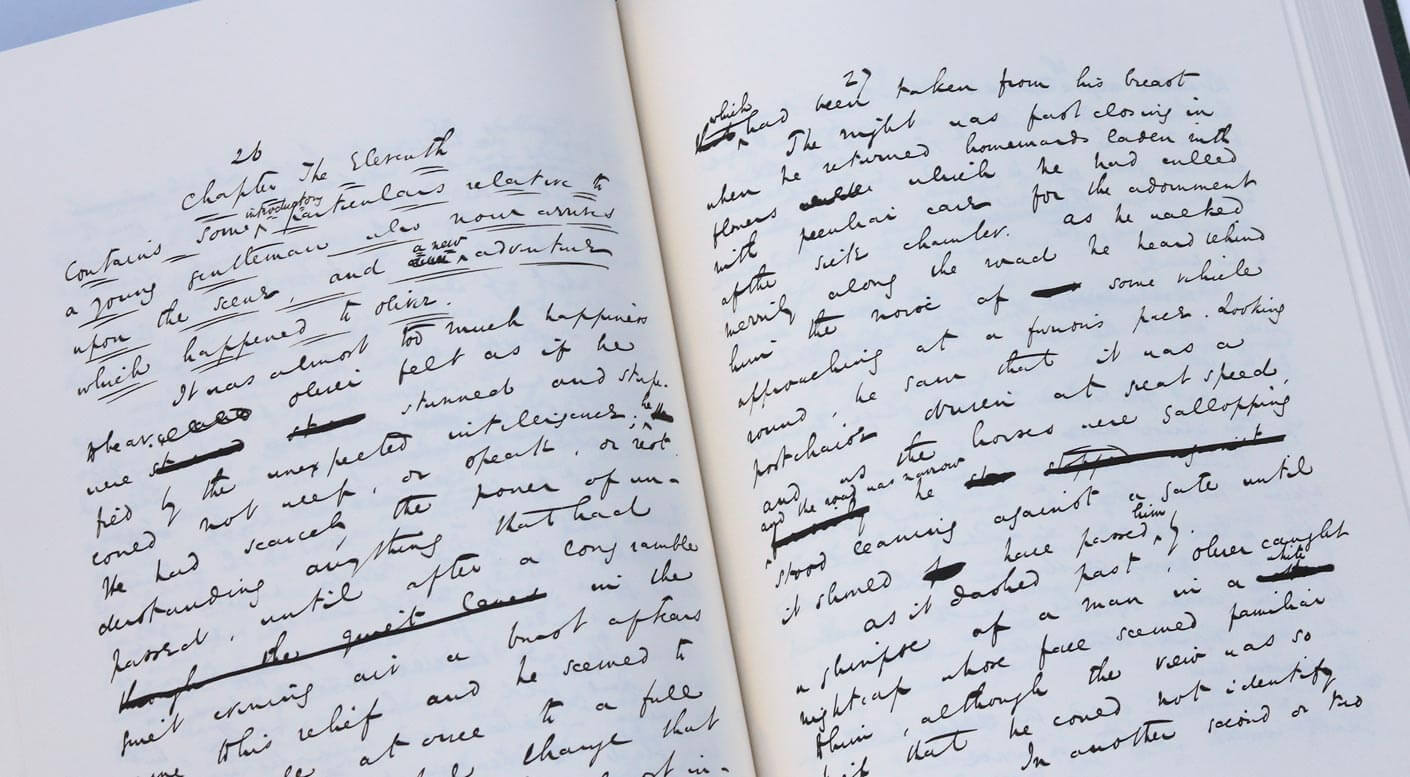 A lost manuscript, recovered only after his death

Dickens treasured these first handwritten manuscripts of Oliver Twist, however, they almost disappeared completely. Buried in the archives of his publisher Richard Bentley, it was not until the death of the novelist that they resurfaced when the archives were sorted and classified. There were 474 pages featuring fairly extensive corrections, corresponding to twenty-two chapters of the book. The missing pages must have been lost or destroyed when the papers were put in order.

Indeed, in 1839, when Dickens quit the editorship of Bentley’s Miscellany, he failed to salvage his precious original manuscripts. “It would one day have an interest for my children”, he lamented a few years later, in a letter to Charles Edward Lester. He attached a single page to the letter, with the words “I should tell you, perhaps as a certificate of the Oliver scrap, that this is a portion of the original and only draught”, also adding, “I never copy”.

The manuscript published here was put up for auction at Sotheby’s, and was bought for the sum of £50 by John Forster, Dickens’s friend and the heir of all the manuscripts of his published novels. Upon his own death, John Forster donated his collection of autograph manuscripts to the Victoria and Albert Museum, where they are still kept today. 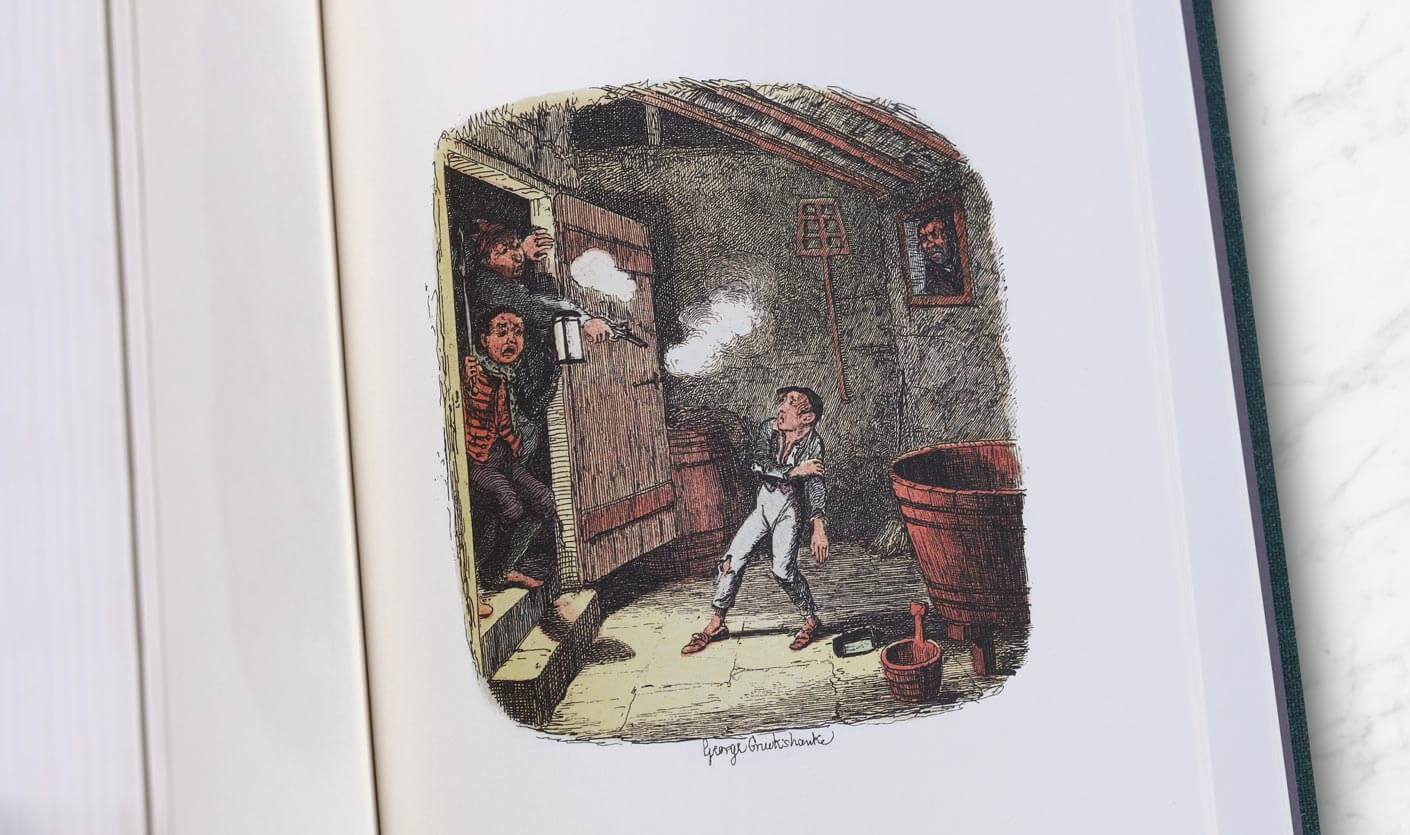 In the preface written for this edition (available here), the writer Simon Callow tells the fascinating story behind the manuscripts of Oliver Twist: the passion and the urgency of the writing, the relationship between author and illustrator, the rather more complicated relationships with his publishers, and above all the accomplishment and literary reputation of the young novelist.

“To read the manuscript of Oliver Twist is to be plunged headlong into the almost inconceivable waves of energy which swept the young Dickens along”, he writes, also adding that “it shows us the young genius in the very act of mastering his craft.”

British actor, writer and director Simon Callow has written extensively on Charles Dickens. His most recent publication was a biography of the novelist published in 2012, Charles Dickens and the Great Theatre of the World, Harper Collins. 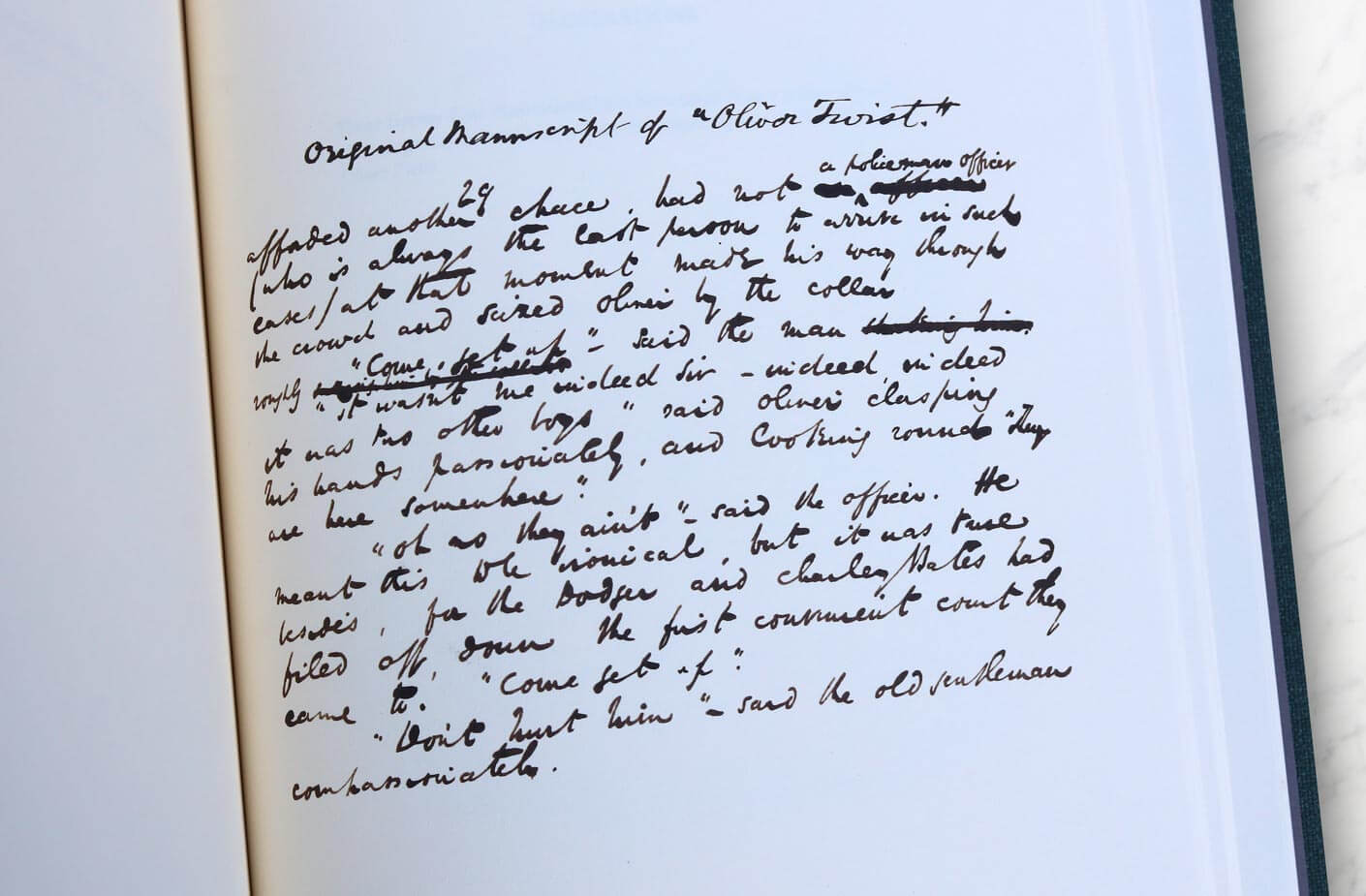 George Cruikshank’s etchings, which originally appeared in black and white, are here reproduced in colour from a rare edition published in 1911.

Born in London in 1792, twenty years before Dickens was born in Portsmouth, the illustrator George Cruikshank found great success through his political cartoons. Following 1820 he began illustrating for books and magazines.

In 1836, when the publisher Richard Bentley hired a young Dickens to be the editor-in-chief of his new periodical, he also enlisted Cruikshank to liven up the magazine’s pages. The artist consequently became the illustrator of Dickens’s first works: Sketches by Boz, The Mudfog Papers and Oliver Twist. From May 1837, he had to provide two etchings per month for Bentley’s Miscellany: one of which was always to accompany the serialised novel Oliver Twist.

After Dickens’s death in 1870, Cruikshank claimed that it was him that had invented Oliver Twist – an assertion refuted by Dickens’s friend John Forster in his biography of the writer – though it is more likely that both Cruikshank and Dickens had a hand in the creation of the universe of Oliver Twist.

As George Cruikshank's illustrations appeared alongside the serialised novel they were not a part of Charles Dickens's original manuscript; as they form a coherent narrative set, we have chosen to present them separately, as a bonus, at the end of the book. 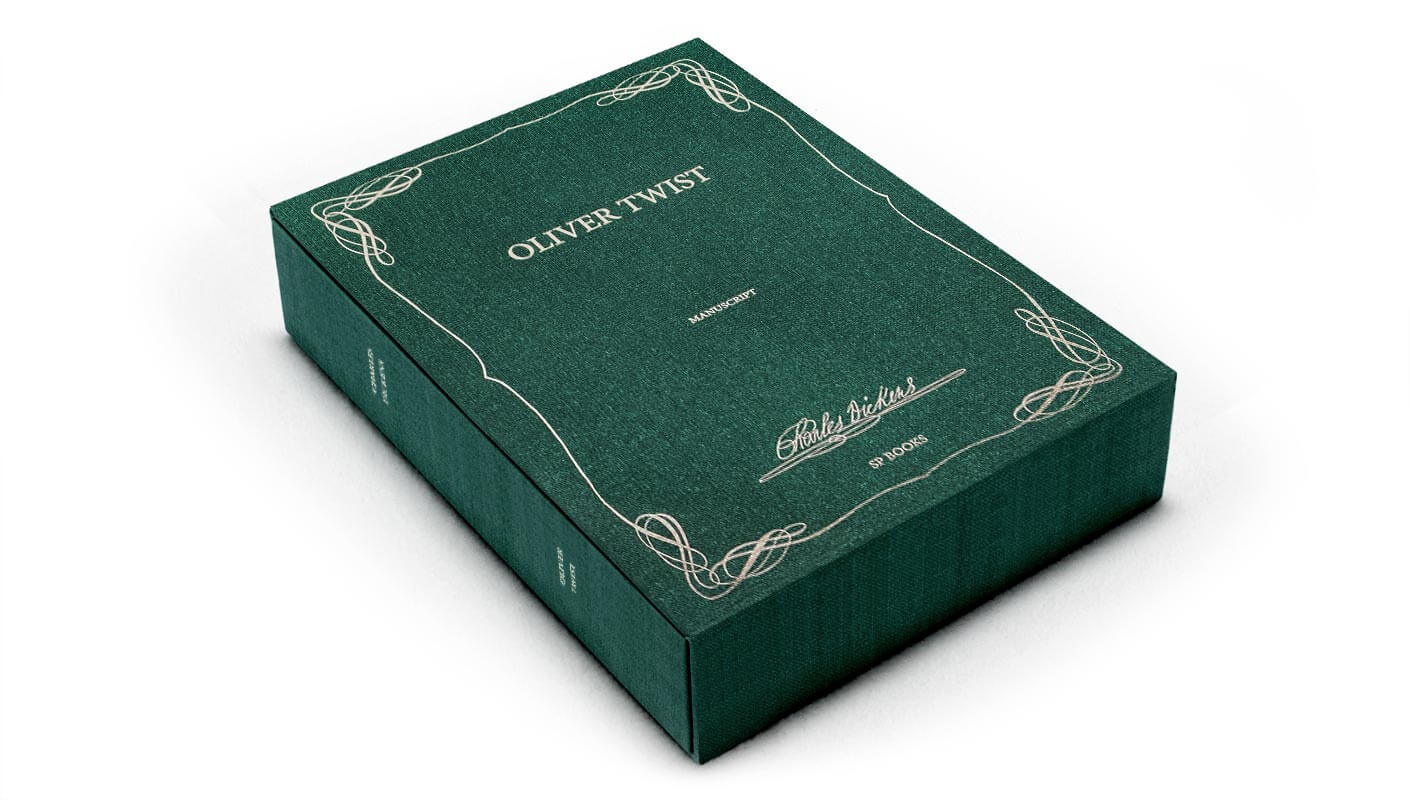 Numbered from 1 to 1,000,
this Bottle green edition is presented in a large format handmade slipcase.