The Jungle Book by Rudyard Kipling

Emerald green edition,
numbered from 1 to 1,000

Today it is impossible to think of Rudyard Kipling without immediately seeing the face of Mowgli, the familiar outlines of Baloo the bear and Bagheera the black panther, and the columned ruins in the jungle. Beyond the iconic literary status of The Jungle Book undoubtedly is, the many adaptations of its stories have made its characters and settings familiar and intimate friends to us all.

The manuscript of The Jungle Book immerses the reader in Kipling’s beautiful handwriting and unseen drawings, as well as creating a new bond with Kaa, Rikki-Tikki-Tavi, Toomaï, Kotuko and friends… It is reproduced here alongside exceptional illustrations by French artist Maurice de Becque. 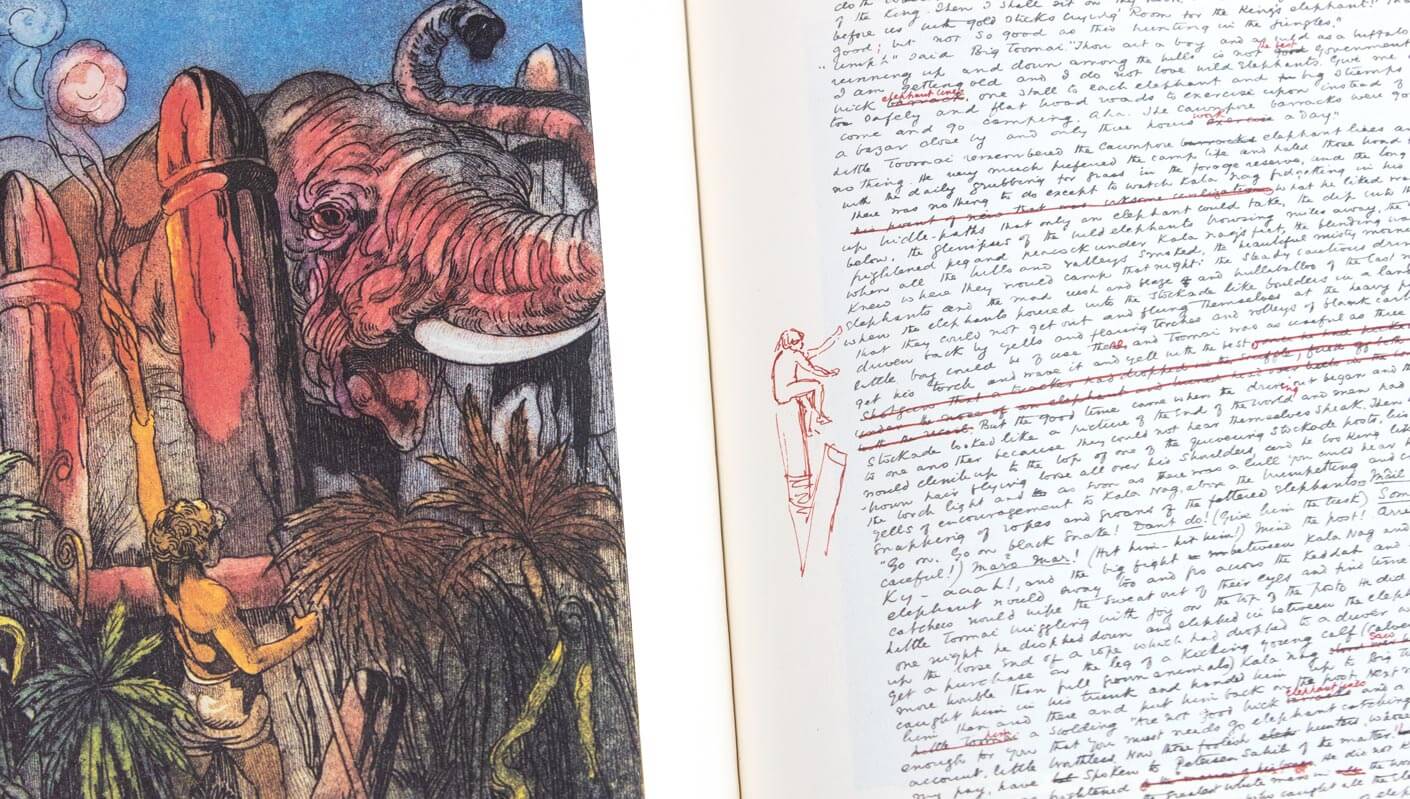 Rudyard Kipling's dream, from early childhood, was to write. It was during his schooldays in England, nostalgic for India, where he had been born and spent his childhood, that he started experimenting. The precocious talent of the young writer did not go unrecognised. Indeed, such was the enthusiasm of his parents that, without telling him, they paid for the publication in Lahore of his first book, Schoolboy Lyrics, a collection of twenty-three poems written when he was fifteen. 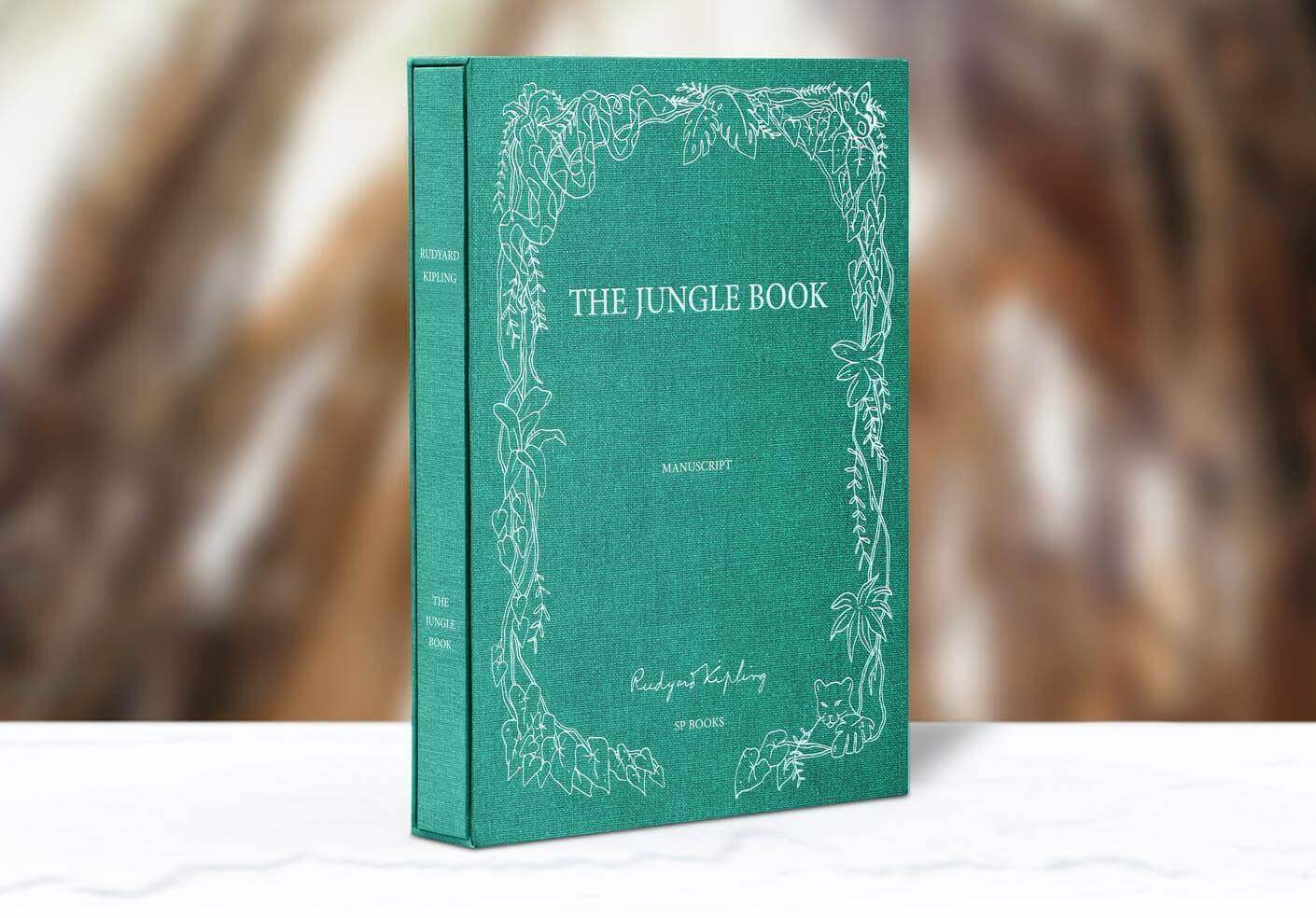 From his boyhood to his death in 1936, Kipling wrote thousands of poems, hundreds of short stories, four novels, travel books, essays, as well as countless articles, prefaces and speeches. While some of his manuscripts have disappeared, many of his notebooks, typescripts, fair copies, annotated books, corrected proofs, sketches and drawings, and copies of texts in the hands of people close to him, have survived.

A manuscript published for the first time

At the end of the 1890s, Kipling, crowned with literary success and aware of the value of these documents, collected them into groups with the help of his wife Caroline and donated them to leading libraries and universities. The manuscript of The Jungle Book was later bequeathed to the British Library by Caroline Kipling on her death in 1940. For the first time in 120 years, it is made available in book form.

The birth of Mowgli, Baloo and Bagheera under Kipling’s pen

What state of mind was Kipling in when he set out to write the seven stories of the first Jungle Book? In 1892 the young man was far from unknown. His first book of fiction, Plain Tales from the Hills, had appeared in 1888; his first novel, The Light that Failed, published in 1891, had been praised to the skies by critics and the public alike and he had been hailed as a new Charles Dickens. In January 1892 he and Caroline married, and after travels in South Africa, Australia, New Zealand and Japan, they settled in a cottage on a farm in Vermont. It was there that their first child, Josephine, was born… and it was also the birthplace of Mowgli. 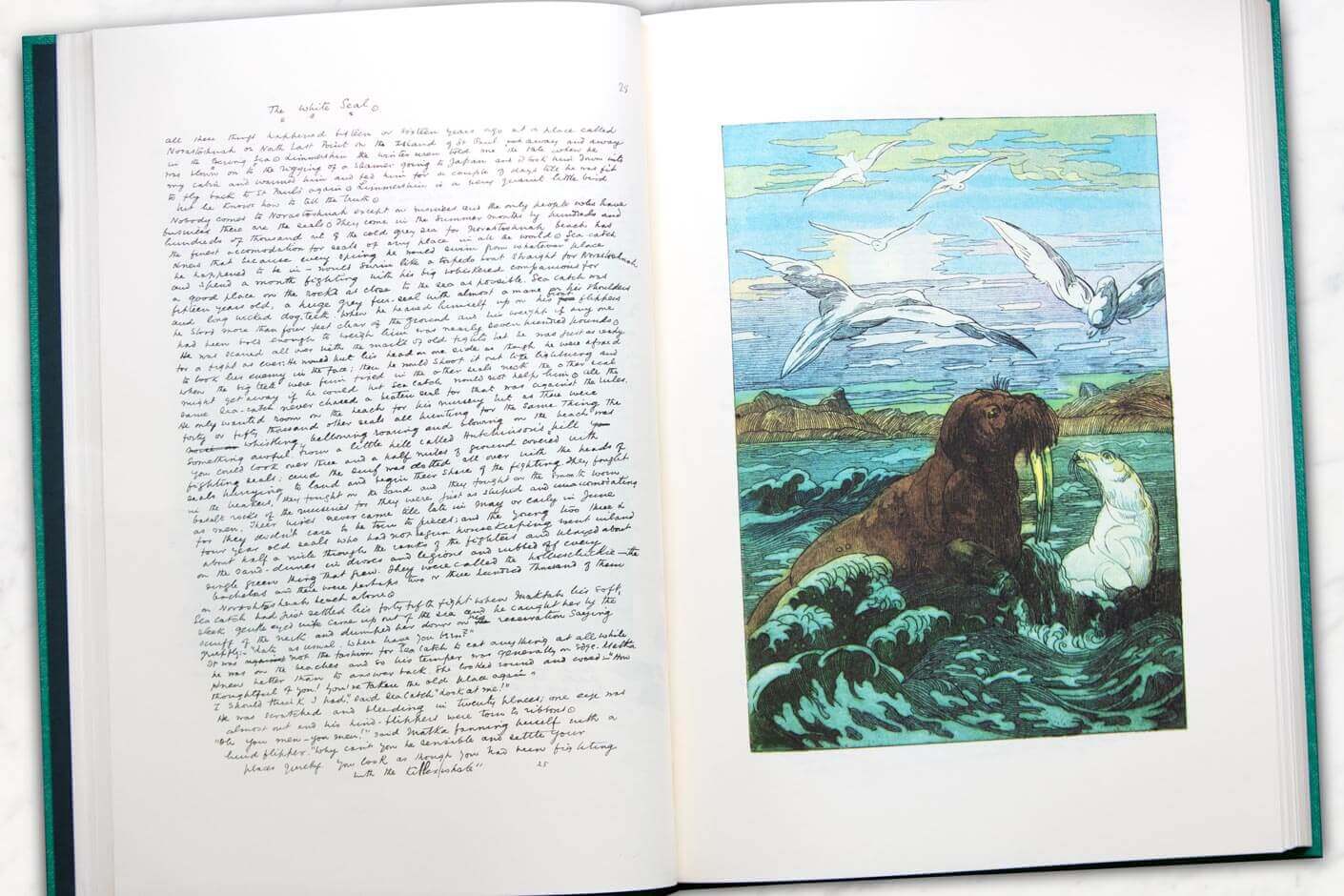 Drawing inspiration from the landscape, from the harshness of the climate, from the novel Nada the Lily by Rider Haggard, and from a life of simple everyday routines – interrupted only by visits from Kipling's father, and from one, Arthur Conan Doyle – Kipling began to write. By November 1892 he had completed 'a wolf story' entitled 'Mowgli's Brothers'. Introducing a lost 'man's cub' adopted by a wolf pack, it is the first of a series of gripping tales which see the appearance of further cult characters such as the heroic mongoose Rikki-Tikki-Tavi, Kotic the white seal, and Kala Nag, the elephant in 'Toomai of the Elephants'.

The achievement of several years of writing

The manuscript consists of 173 separate sheets, referenced here by the number of the sheet and then its recto and verso (r and v). It contains the stories of both The Jungle Book and The Second Jungle Book, the division between them indicated by the inscription 'Other Jungle Book' on the recto of sheet 86. Striking drawings appear here and there, sketches of characters and animals mostly, reminding us, if we need reminding, of the clarity of the images passing through the writer's mind as he worked.

Also included are the verses and songs that in the books appear at the beginning and end of each story. The 'Parade-Song of the Camp-Animals', 'Rikki-Tikki-Tavi', 'Road Song of the Bandar-Log', or the verses at the beginning of 'The White Seal' and 'Mowgli’s Brothers', which appear on sheets 1-4, plunge the reader without preamble into Kipling's world, before the famous opening lines of the first book are revealed on sheet 5: 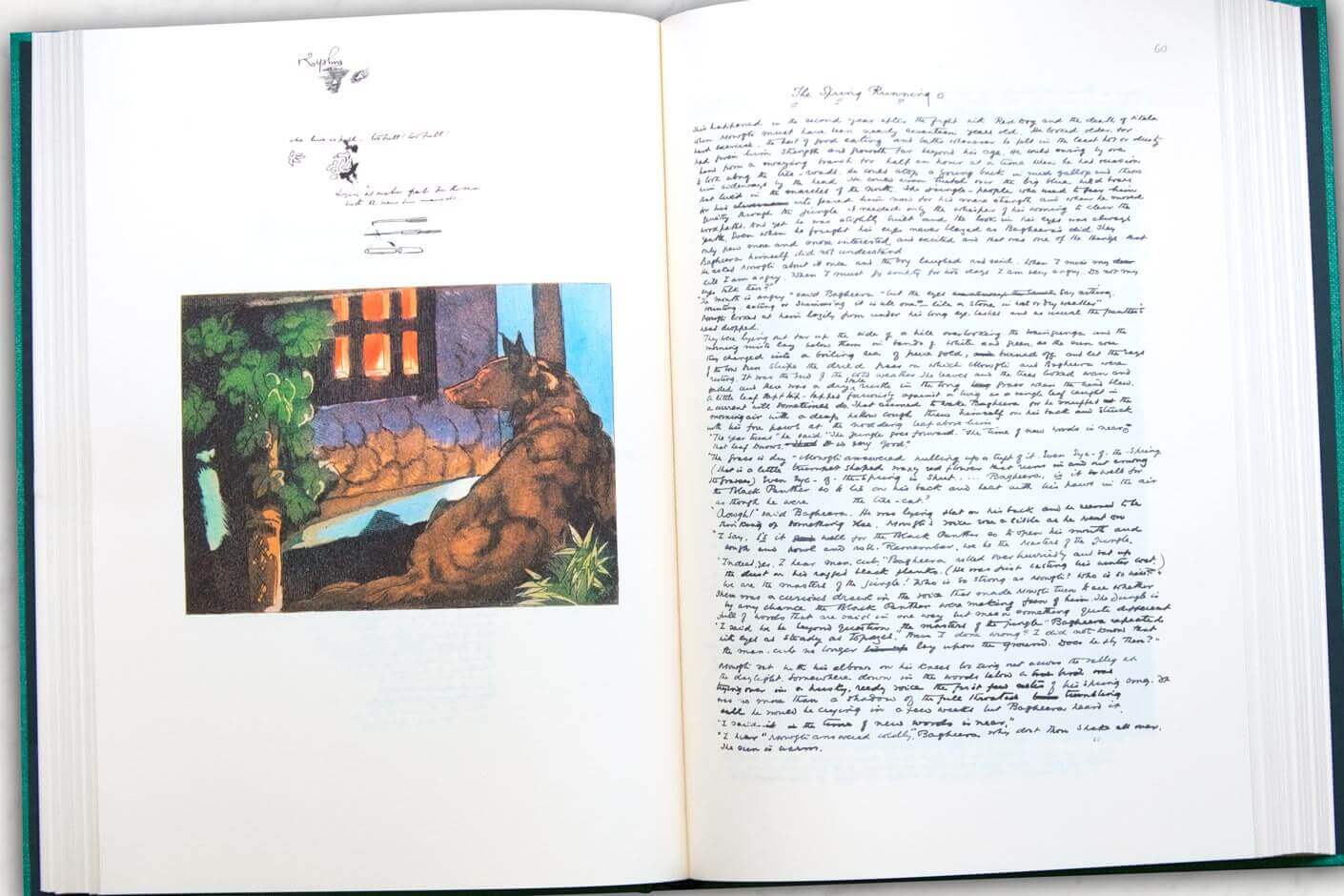 It was about seven o’clock of a very warm evening among the Seeonee hills when Father Wolf woke up from his day's rest, scratched himself, yawned and spread out his paws one after the other to get rid of the sleepy feeling in their tips.

The stories – not arranged in the same order as the editions of 1894 and 1895 –are easy to follow. The writing, both narrative and dialogue, is regular and confident, amply filling the pages. A few differences from the titles in the final printed versions may be noted: 'Her Majesty's Servants' was originally 'The Servants of the Queen', while 'Red Dog' was 'The Little People of the Rocks'. Kipling also recast some stories so they appear twice, for example 'Quiquern' and 'The King's Ankus'.

A few words crossed out, with others written in, are evidence of Kipling's care for precision and rhythm. He also added scrawled instructions for layout or typography, enigmatic numerical calculations, lists of deleted titles and indications for the type writer...

Kipling put the final touches to The Jungle Book and The Second Jungle Book in November 1892 and March 1895 respectively. The manuscript, which the child in each of us might wish were even longer, concludes with the pages that carry Kipling's unforgettable poem 'The Law of the Jungle':

Now these are the Laws of the Jungle and many and mighty are they. But the head of the Law and the hoof, and the haunch and the hump is - Obey.

A facsimile with 96 coloured etchings by Maurice de Becque

In this facsimile edition, the spectacular settings and creatures from The Jungle Book are accompanied with 96 illustrations by French artist Maurice de Becque (1878-1938) made in 1924. De Becque is also famous for illustrating Jack London’s Call of the Wild, Charles Baudelaire’s Flowers of Evil and Leconte de Lisle’s poems. 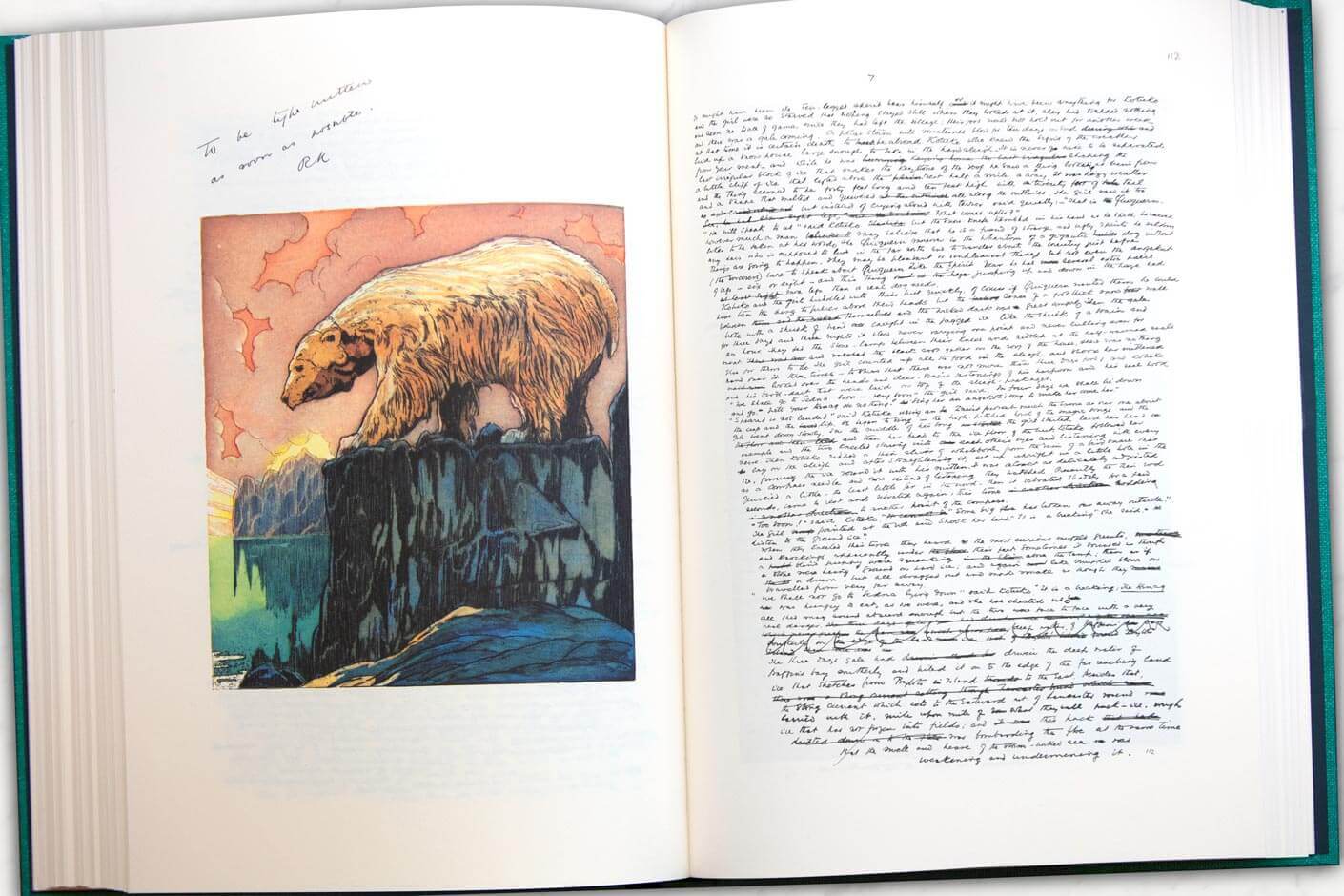 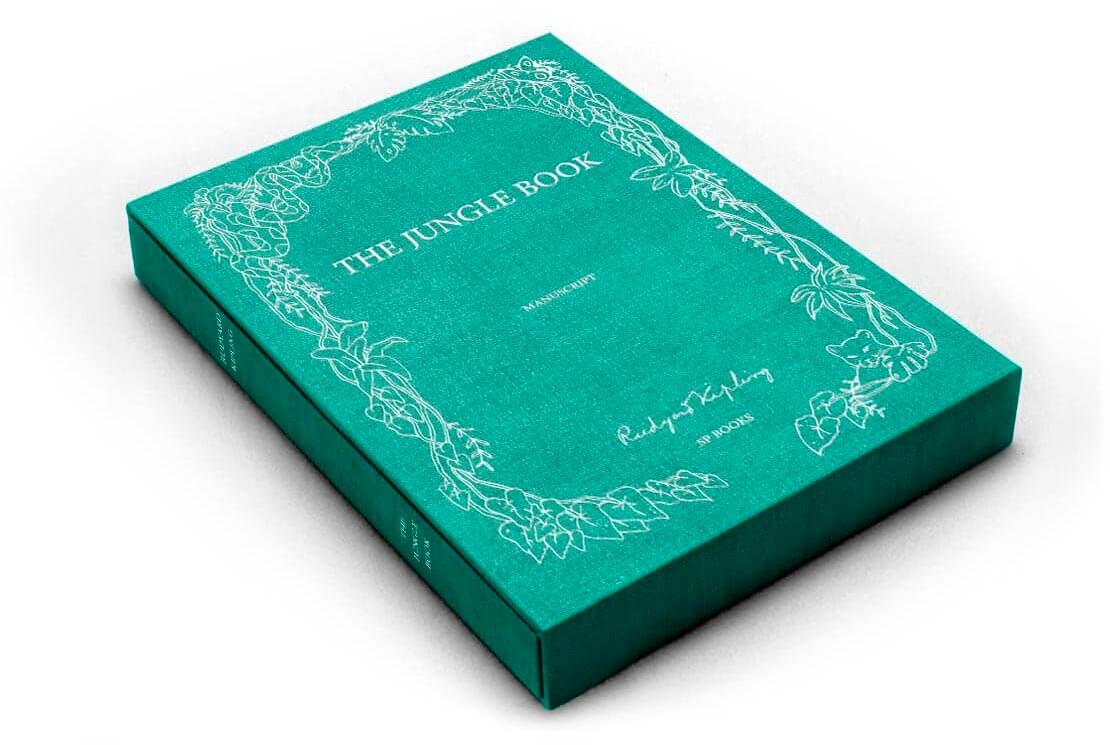 Numbered from 1 to 1,000, this Emerald green edition is presented in a large format handmade slipcase.

Numbered from 1 to 1,000,
this Emerald green edition is presented
in a large format handmade slipcase.