A hundred and fifty years ago, a century before the first astronaut set foot on the moon with his ‘one small step for a man; one giant leap for mankind’, in 1869 Jules Verne took his adventurers on a new and extraordinary trip Autour de la Lune (A Trip Around the Moon). Between mid-April and May that year he prepared for typesetting the hundred or so pages which comprise this novel and about which he had been thinking since at least 1864 when he first mentions the title ‘Autour de la Lune’. It was published in instalments between 4 November and 8 December in the Journal des débats. 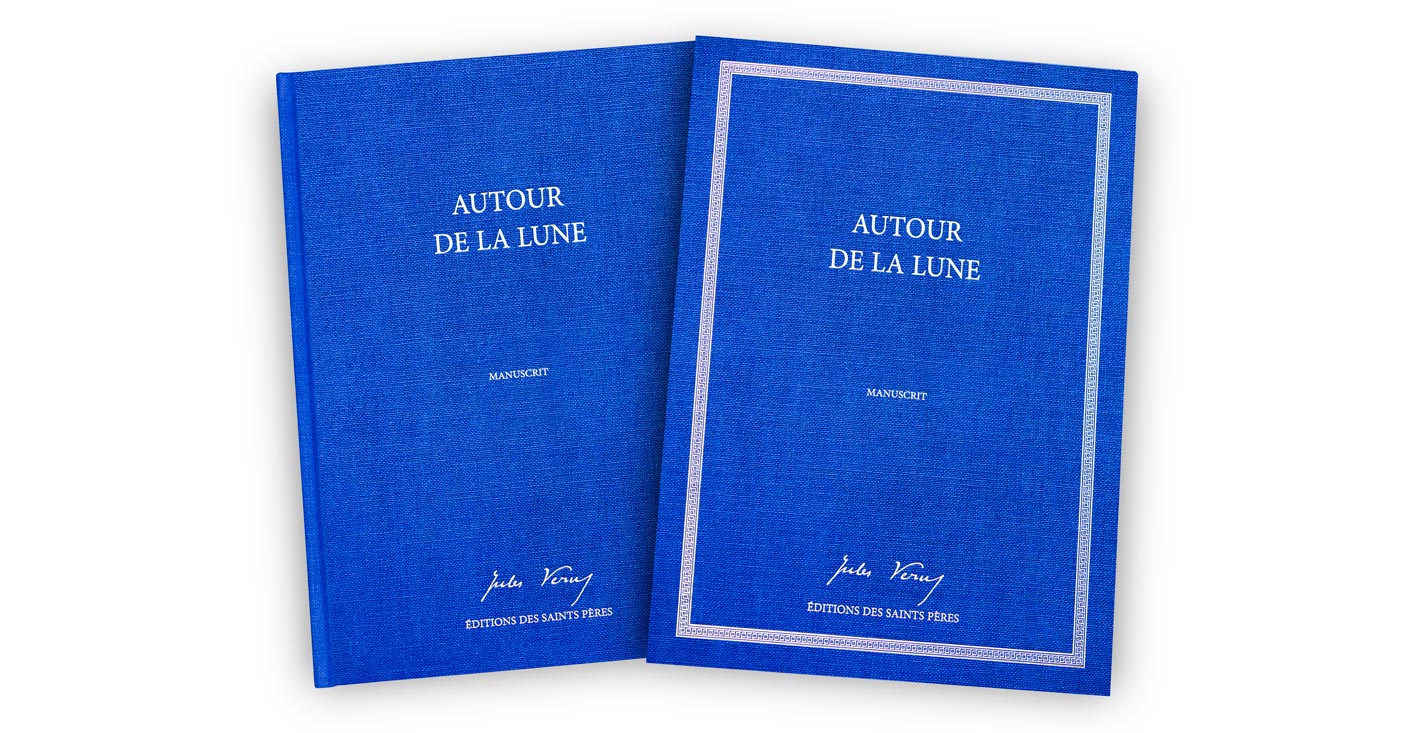 The conquest of the Moon by Jules Verne

The manuscript, carefully edited and paginated, is preserved today in the Jules Verne Museum in Nantes, Verne’s birthplace. It includes wide margins in which appear both autograph corrections by Verne and comments by his publisher Pierre-Jules Hetzel. As well as reproducing the manuscript, this volume includes the engravings used in the first illustrated edition and an appendix containing the technical sketches made by Verne when writing the first draft of his novel – a draft of about forty pages. 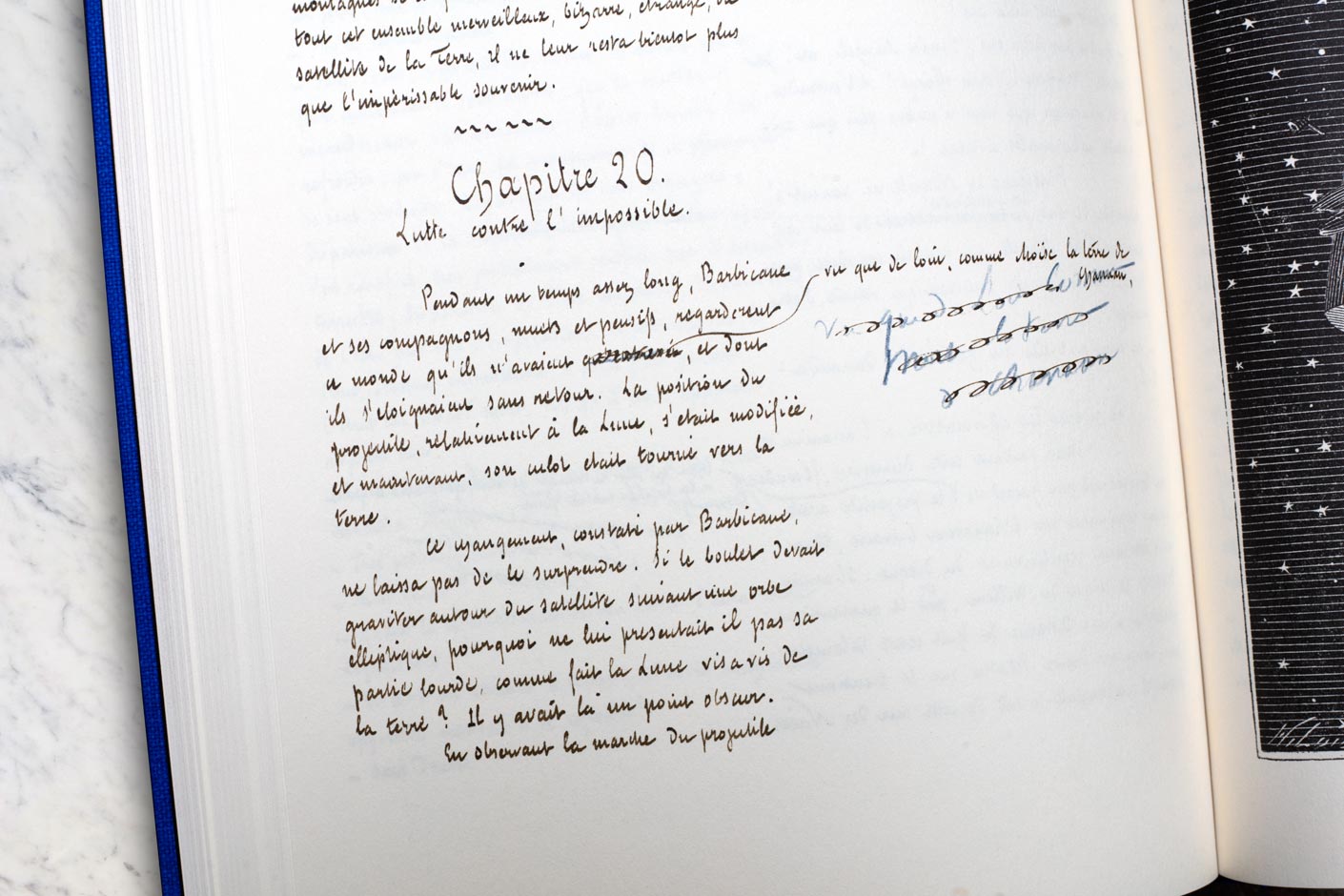 From the Earth to the Moon. Non-stop in 97 hours and 20 minutes

In 1865, just one year after the appearance of Voyage au centre de la Terre (Journey to the Centre of the Earth), Jules Verne published his next work De la Terre à la Lune. Trajet direct en 97 heures et 20 minutes (From the Earth to the Moon. Non-stop in 97 hours and 20 minutes). In this novel, which was to be the precursor to Autour de la Lune, he describes the amazing plan hatched by an artillery club to send three travellers on a trip to the moon by firing them in an aluminium shell from a giant cannon in Florida. All the preparations for this expedition and its scientific background right up to the firing of the gun are described in great detail and the experiment is successful but ends on a note of suspense. The scientists at the Cambridge Observatory discover that the projectile has passed ‘close enough’ to be ‘held by the moon’s gravitational field’ leaving the outcome of the trip in doubt. What is the fate of Michel Ardan, Barbicane and Nicholl, the three heroes imprisoned in the aluminium shell? The question remains unanswered until 1869 when Verne finally reveals what becomes of the adventurers on board the projectile ‘in details as dramatic as they are astonishing’. 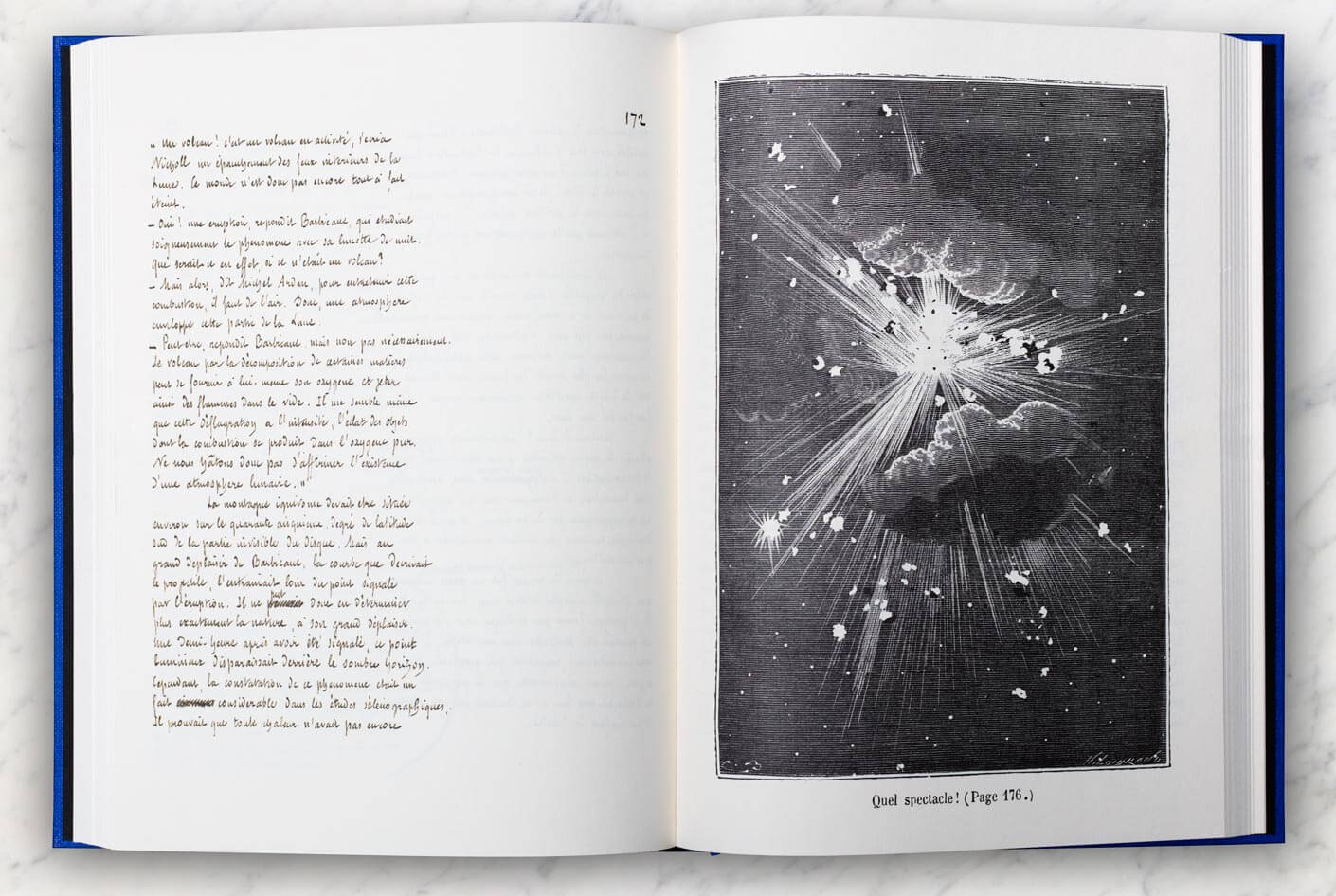 With the firing of the projectile from Florida, just a few hundreds of kilometres from Cap Canaveral, to its final splash-down in the ocean and even the choice of three astronauts, Jules Verne anticipated in uncanny fashion the main elements of twentieth century space travel and in particular the Apollo 8 mission which was the first to orbit the moon. As the French comet specialist Jacques Crovisier observes, ‘One hundred years after the appearance of his novel in 1869, Jules Verne’s extraordinary vision became a reality.’ 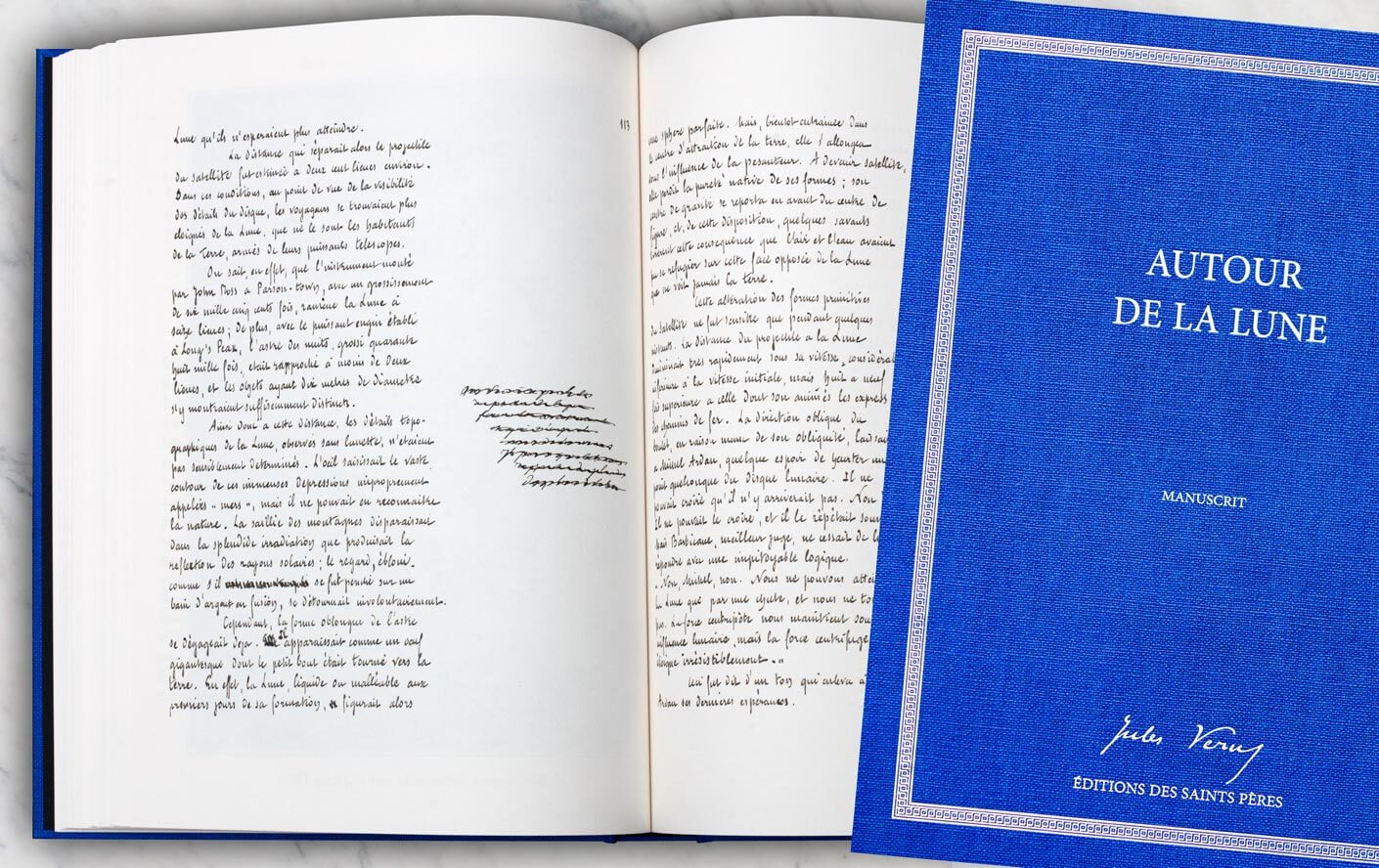 44 engravings from the first illustrated edition

This manuscript edition of Autour de la Lune includes the 44 engravings by Henri Théophile Hildibrand done from the original drawings of Émile Bayard and Alphonse de Neuville. This series of drawings can be considered as the first to represent a space travel building on scientific bases. They were used in the first illustrated edition published by Pierre-Jules Hetzel, Jules Verne’s life-long publisher. 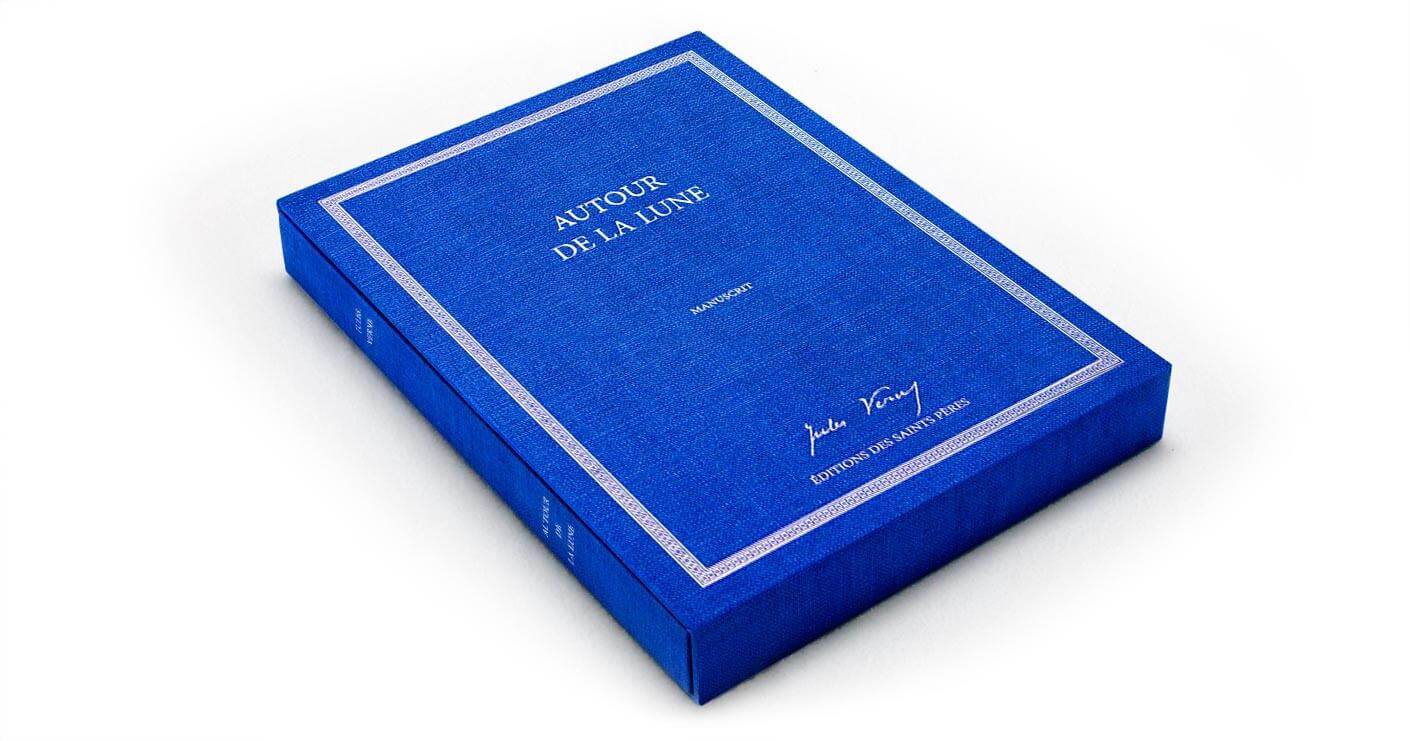 Reproduced as an appendix are a few drawings which Verne made for the first draft of the novel between 1864 and 1869. They include two sketches representing the projectile’s progress towards the moon, a diagram showing the Earth’s rotation together with his calculations and a diagram of moon phases.

Numbered from 1 to 1,000, this Klein blue edition is presented in a large format handmade slipcase.

Numbered from 1 to 1,000,
this Klein blue edition is presented in
a large format handmade slipcase.