To launch our collection of Portuguese-language manuscripts, we are delighted to present a manuscript edition of A hora da estrela (The Hour of the Star), the last novel published by Clarice Lispector (1977) which is considered one of her most important works.

A novelist, multilingual journalist and major figure in Brazilian literature, Clarice Lispector is described by her biographer Benjamin Mosher as “the most important Jewish writer since Kafka”. Her writing possesses an unrivalled power: that of awakening the reader to himself. In the manuscript of A hora da estrela, her artistry is laid bare to contemplate on the page. In this large-format boxed set, the manuscript has been reproduced in a graphically restored version of the original, revealing the corrections, variations and notes made previously to the final draft, as if the author has just put pen to paper. The original document is conserved by Lispector’s family at the Moreira Salles Institute in Rio de Janeiro. 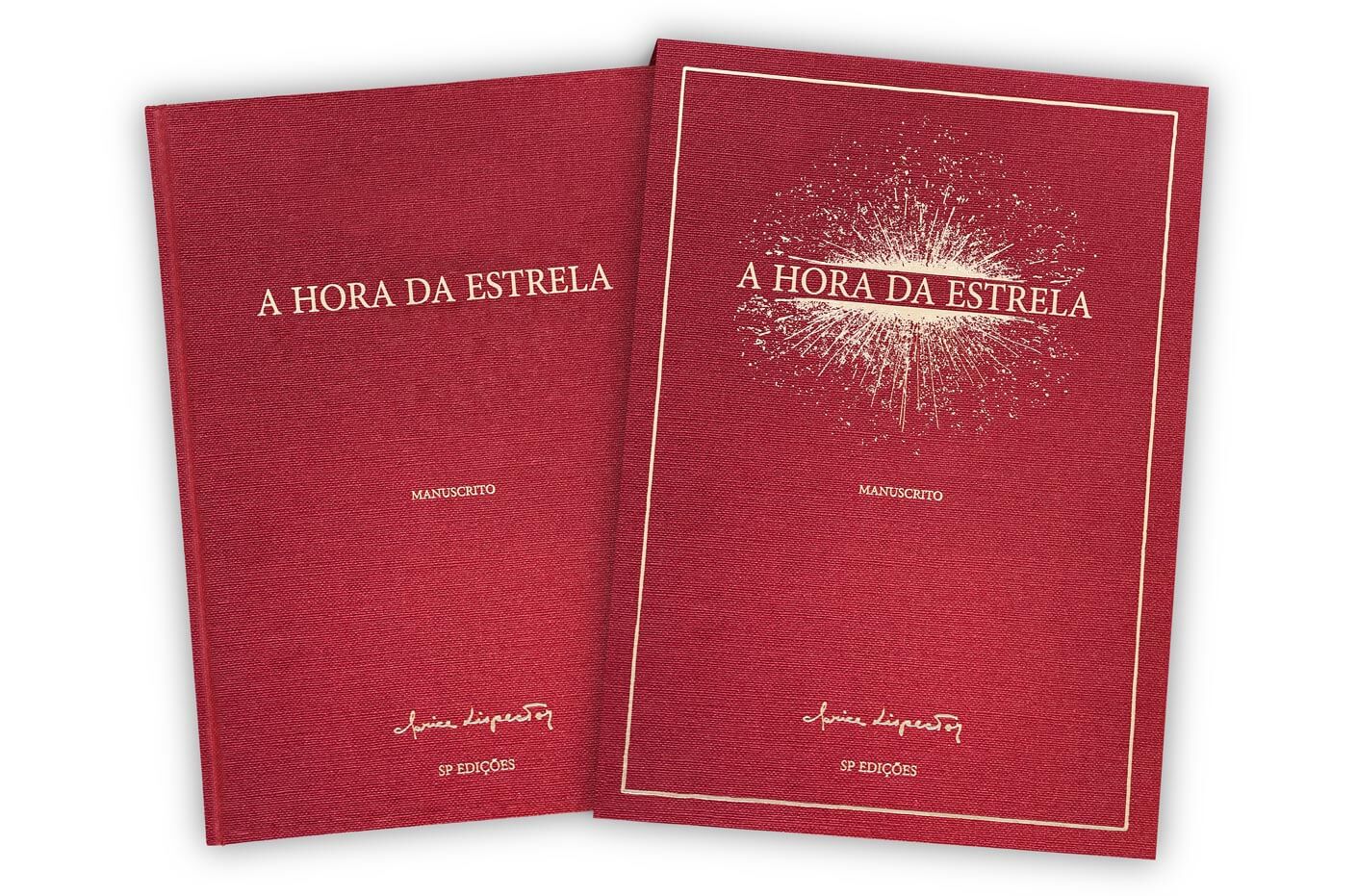 Published in 1977, the year of Clarice’s death, this novel is also closely linked to the beginning of her life, her geographic and cultural background being similar to that of Macabéa. The ‘hour of the star’ is a powerful symbol: just like the death of the heroine, hit by a car moments after a fortune-teller predicts her bright future, this manuscript, one of Clarice Lispector’s greatest literary successes, is imbued with a quality of immortality.

For Clarice Lispector, life and work were inseparable, which is reflected in how she writes. At the age of 56, she had already written several books that had been praised by readers and critics alike. In her apartment on 88 Rua Sampaio in Rio, she set herself to writing a novel that she christened with 13 titles, which would be known as A hora da estrela.

The novelist’s particular writing method is revealed in her manuscript: firstly there is the actual writing, lengthwise, in continuous streams, on notebook sheets often paginated by hand. Secondly, there is her immediate writing, in the form of scattered notes on fragments of paper of all kinds – used envelopes, business cards, torn pages, appointment reminders, etc., for when inspiration came to her at moments throughout the day. The simultaneity of the notes taken within the course of other daily activities undoubtedly explains the graphic variations of the manuscript. She can be just as easily imagined at her writing desk as away from it, scribbling on paper while out and about, or between meetings, phrases springing from her imagination to unfold the work in progress. 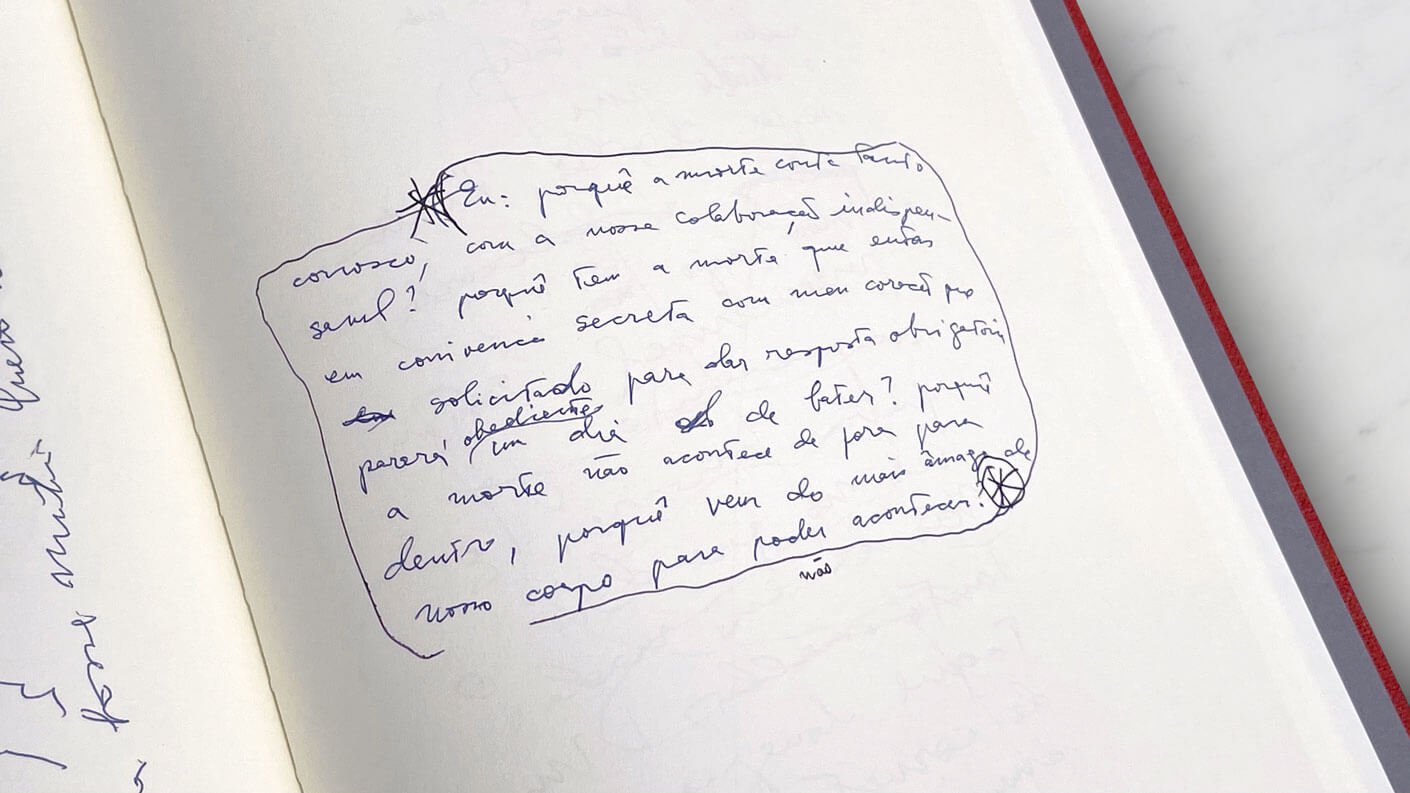 The manuscript also offers the opportunity to track the development and improvement of the text: the editing process is revealed through crossings-out of whole extracts, additional words and sentences that travel in all directions in order to reach the refined final version, closer to what Clarice Lispector wanted to say. Indeed, a comparison between the published version and this text shows substantial differences: the final narrative is further developed and modified to both expand and refine the seemingly drab and average, but ultimately profound character of Macabéa.

‘So young and already rusted.’

The original manuscript subsequently underwent even more modifications not visible here. It shows stark differences to the novel published by Rocco, which was revised definitively by the author on the graphic proofs.

A living manuscript, revealing elements both curious and personal

First drafts, crossed out passages, added words… the manuscript of A hora de estrela is a living document, which tells the story of Clarice Lispector’s novel in transformation, like a photograph of the creation process. 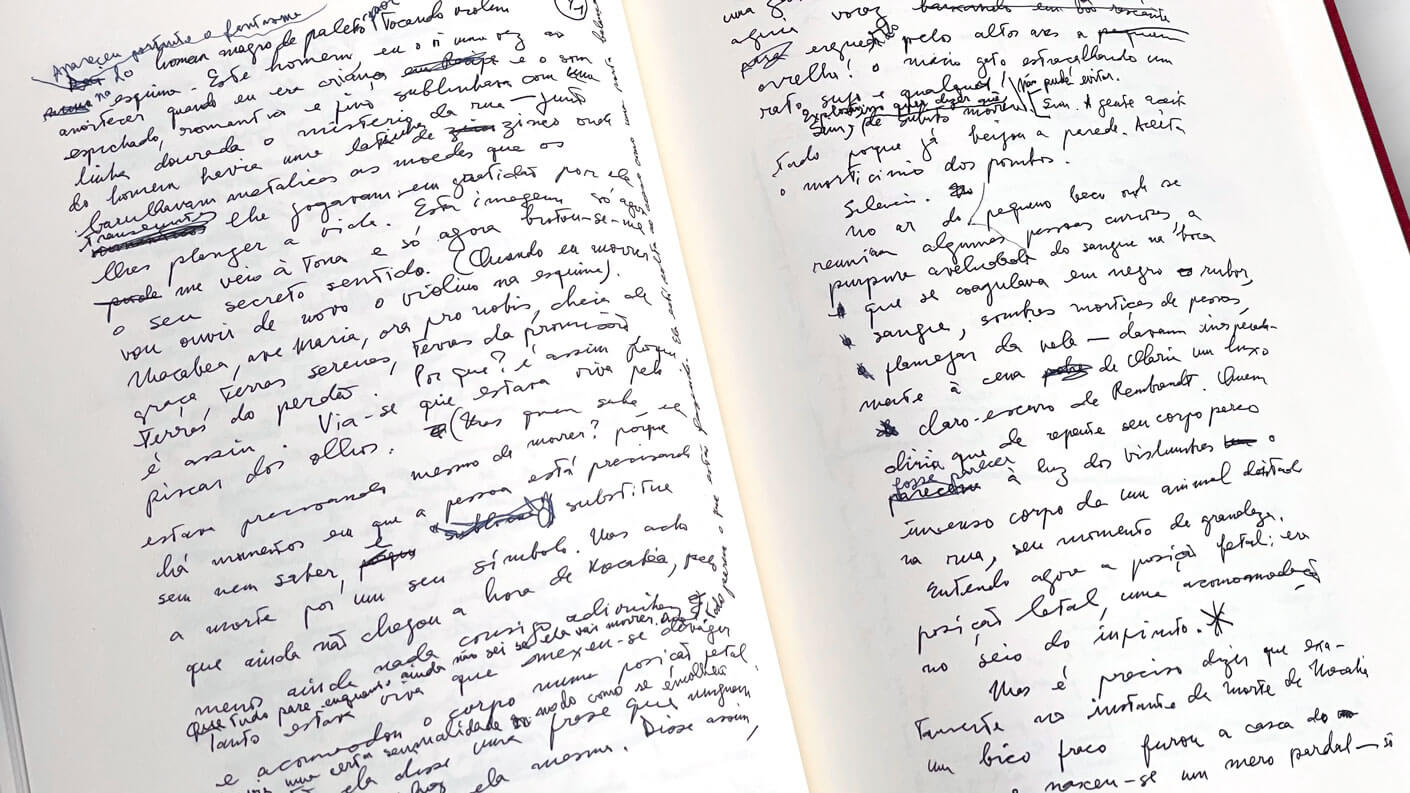 There are different versions of several key passages in the text. Notably, there are two variations of the final scene: the death of Macabéa, her ‘hour of the star’ – the published version is the result of a fusion of these two variants. It is a similar case with the beginning of the text, which was initially written in a condensed form, then stripped down on several other pages, taking it closer to what it would become at the end. Of her own handwriting, Clarice Lispector said that she ‘sews inwards’ – just as her sentences spiral from the exterior to the interior, this circularity appears graphically on many pages of the manuscript.

There are also some curious elements among her drafts and early versions: the tentative development of 13 titles for the book; traces of the author's identification with her narrator, visible in the gender slips she makes by using the feminine voice for her narrator; small fragments that bear witness to the writer's personal life, such as the time of her appointments and her address, that of the last apartment she inhabited in Rio before passing away in December 1977; and even lipstick prints.

The novel tells the story of Macabéa, a young woman who escapes the misery of her native Alagoas to become a typist in Rio de Janeiro. The fictional narrator Rodrigo S.M. reports her cramped, loveless life, trying in desperation to unravel the mysteries of his estranged anti-heroine who has no place in society. 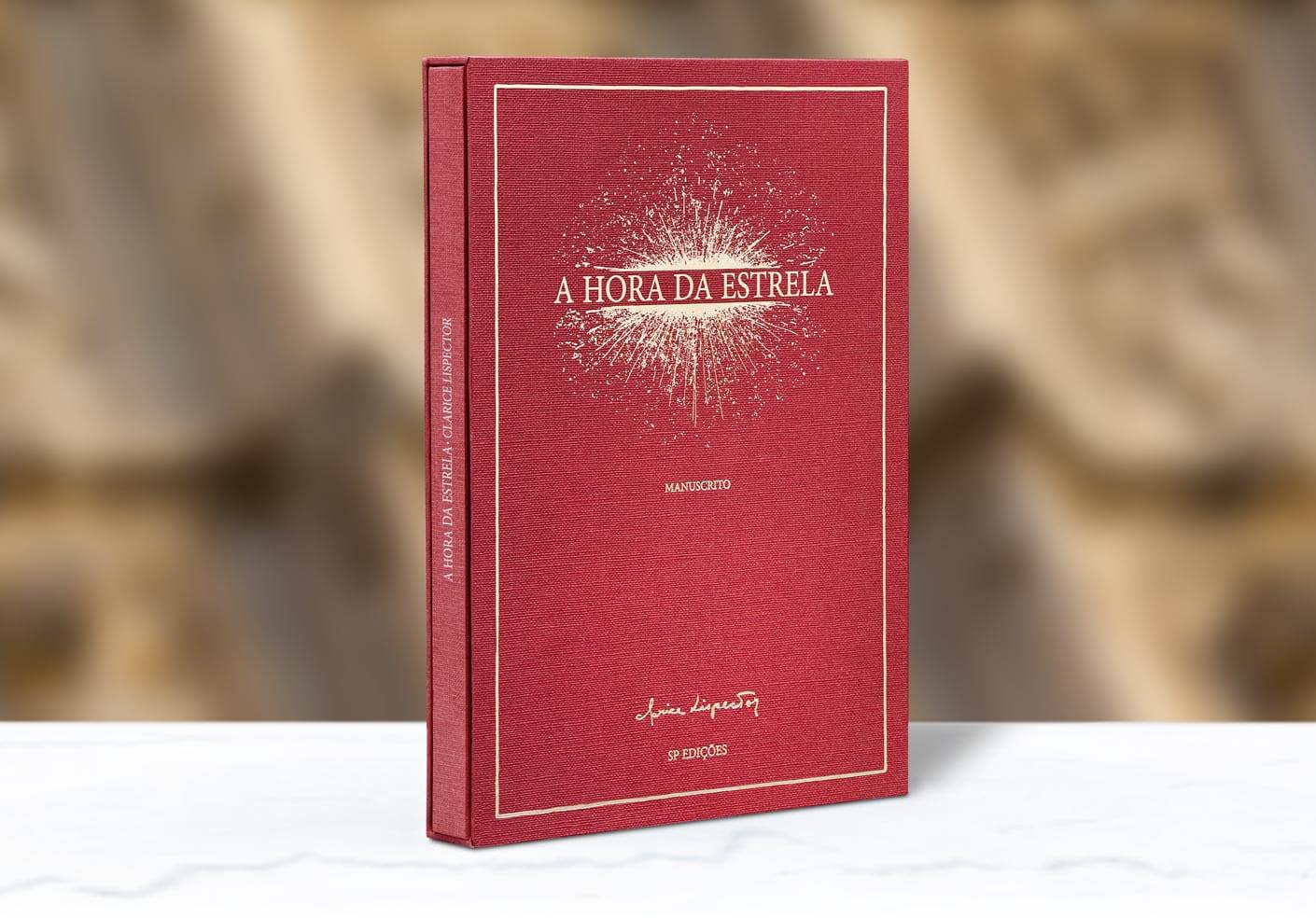 In this work more than ever, Clarice deploys an intimate style, but with a social dimension. In A hora da estrela, it is ‘the confrontation between [...] the modern Brazilian writer and the poverty of the Brazilian population’* which creates a linguistic conflict: is it possible to articulate this poverty – both physical, emotional and material – without distorting it? To explore this, the novelist paints a juxtaposition between two perspectives: that of human isolation represented by Macabéa, a reverse heroine who can get nowhere in modern society; and the difficulty of narration as told by Rodrigo S.M., due to the impotence of language.

'It is my intention, as I suggested earlier, to write with ever greater simplicity. [...] Like every writer, I am clearly tempted to use succulent terms: I have at my command magnificent adjectives, robust nouns, and verbs so agile that they glide through the atmosphere as they move into action. Yet I have no intention of adorning the word, for were I to touch the girl's bread, that bread would turn to gold—and the girl … would be unable to bite into it, and consequently die of hunger.'

It’s not surprising then, that Macabéa’s death is the climax of the narrative. This is the only time that she truly radiates – her death is her birth.

‘Death is an encounter with self.’

With an interconnected logic, Rodrigo S.M. experiences a parallel life to Macabéa. Like the young woman, the writer, despised by a society which he understands only too well, is an outcast. Narrating the life of his protagonist, he begins to live like her, transforming himself, falling in love and dying with her – for the death of the character is also the liberation of the writer. Yet a third level of meaning emerges through the lines of the manuscript, embodied by Clarice Lispector: the narrator’s questions are really the questions of the author.

As well as being Clarice Lispector’s most translated novel, A hora da estrela was adapted for film in 1985, directed by Susana Amaral, winning national and international awards. 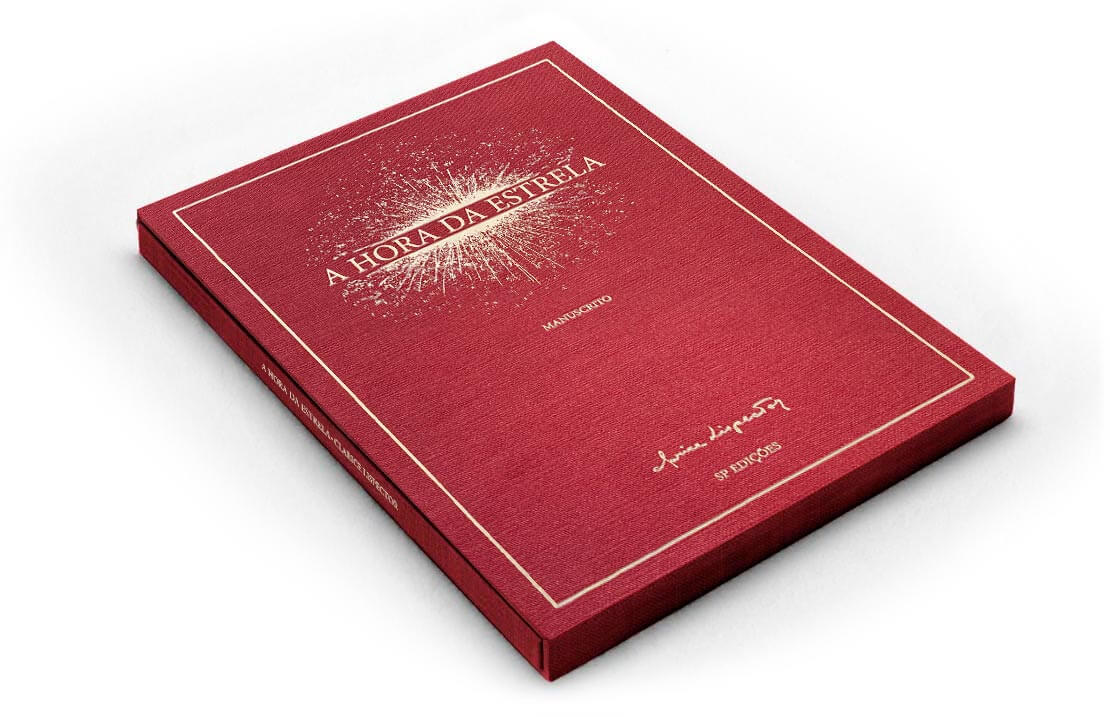 Numbered from 1 to 1,000,
this Carmine red edition is presented in
a large format handmade slipcase.