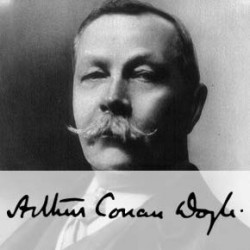 An English writer and physician, Sir Arthur Conan Doyle was born in Edinburgh on 22 May 1859 and died in Crowborough on 7 July 1930. He is creator of the iconic figure of Sherlock Holmes.

Real name Arthur Ignatius Conan Doyle, he was the son of Mary Foley and the painter Charles Altamont Doyle, as well as the nephew of renowned Victorian illustrator Richard Doyle. He studied at the Jesuit school at Hodder Place in Lancashire and then at Stonyhurst College. He decided to put an end to his schooling in 1875, as a Christian education conflicted with his free spirit. It was at this point that he began studying medicine in Edinburgh, to much success. He became a doctor in the British troops during the Second Boer War in South Africa in 1900.

Sherlock Holmes and The Lost World

The character of Sherlock Holmes appeared for the first time in 1887. Doyle’s shaping of the character was inspired by his former university professor Joseph Bell, a Scottish physician and professor of medicine. Bell trained his students to make use of logical reasoning, urging them to analyse a patient’s gestures, accents and gait. He explained that a lot could be deduced from these elements, and it was this particular skill that Conan Doyle attributed to the character of his detective, Sherlock Holmes. Joseph Bell was aware that he had inspired the famous character and even ended up writing the preface to one of his adventures. The first of Conan Doyle’s published works was A Study in Scarlet in 1887.

Sherlock Holmes appears in numerous short stories written over a period of thirty-five years, but most significantly in four detective novels. After A Study in Scarlet, he published The Sign of the Four in 1890, The Hound of the Baskervilles in 1902 and The Valley of Fear in 1914.

In A Study in Scarlet, it is Dr. Watson who narrates the story. At number 3 Lauriston Gardens, a man is found dead, but with no injuries to determine whether or not he has been murdered. Rache! or ‘revenge’ in German, is written on the wall at the scene of the crime. Based on this evidence Sherlock Holmes embarks on the complicated business of unravelling the case, investigating the link between John Ferrier, murdered by Mormons in 1860, and the kidnapping of Lucy, his daughter. This detective novel features a full demonstration of Sherlock’s talents, in particular his capacity for deduction and scientific analysis, which differed significantly from the methods used in detective books published previously.

The Sign of the Four, or The Second Adventure of Sherlock Holmes

The story of The Sign of the Four takes place in 1888. It features the treasures and secrets of colonial India, Toby the dog and Mary Morstan, Watson's future wife. Sherlock Holmes is presented at the beginning of the novel as something of a disreputable character, taking drugs to alleviate his boredom. To his mind, there is no one who can match his facility for unravelling problems, and in order to occupy his mind he needs a case that is worthy of his abilities. The difference between Sherlock Holmes and Watson is immediately obvious to the reader - the former has strayed beyond the bounds of morality and is as unreserved as he is enigmatic, while Watson is straightforward and guided by strict morals. Nevertheless, Mary Morstan presents a case to the unlikely pair that entices them both - it concerns a missing father, a mysterious meeting and a pearl received every year from an anonymous sender.

Although Conan Doyle is best-known for writing Sherlock Holmes, he is also the author of other major works. The Lost World, published in 1912, is a fantasy adventure novel in which a journalist named Edward Malone aims to prove himself and win the hand of the woman he loves. After meeting the extraordinary Professor Challenger, he pledges to join the search for a lost world, where Challenger claims prehistoric animals are still living on a remote plateau in South America (somewhere between the Amazon and Orinoco, precisely). Thus Edward Malone, renowned traveller John Roxton and anatomy professor Mr Summerlee end up setting off to the other side of the world. The three friends, joined en route by Professor Challenger, lead an expedition in search of a world whose very existence is questioned by the scientific community and the public. On arrival, they do in fact discover a high plateau, populated by animals from ancient times, with markedly more extraordinary discoveries to follow. With The Lost World Sir Arthur Conan Doyle developed a complex and varied imaginary landscape, making the novel one of his best known and recognised works.

Conan Doyle was very politically engaged, especially following the Second Boer War in South Africa between Britain and two independent Boer states at the start of the 20th century. He wrote an essay entitled The War in South Africa: Its Cause and Conduct, in which he made the case justifying the role of the United Kingdom in the war in the face of global condemnation of its actions. On a similar theme, he wrote a longer pamphlet entitled The Great Boer War. Conan Doyle ran for Parliament twice for the Liberal Unionist Party, but was not elected despite receiving a respectable share of the votes. Subsequently, he wrote The Crime of the Congo in order to shed light on the horrors, abuses and crimes engendered by colonialism. He was also a supporter of the campaign for the reform of the Congo Free State.

Much like his character Sherlock Holmes, Arthur Conan Doyle personally investigated two court cases. The first case related to George Eladji and the second to Oscar Slater - Conan Doyle exposed the inconsistencies and grey areas of each case and his actions led to the two innocent men being exonerated.The first defendant was a half-British, half-Indian man charged with blackmail and slaughtering cattle. The second, a Jew of German origin, was initially convicted of bludgeoning an 82-year-old woman in Glasgow. Conan Doyle undertook to support Slater and published an article on the case - two witnesses ultimately withdrew their statements and Oscar Slater was freed.

The inevitable end of Sherlock Holmes

Sir Arthur Conan Doyle, knighted for his political contribution as well as for his novels, short stories and poems, died on 7 July 1930. Having married twice, he was the father of five children and a keen cricketer. Through his work he has left an indelible mark on English and world literature. Even today, many contemporary creators continue the thread of his imagination through cinema adaptations, series and new novels.