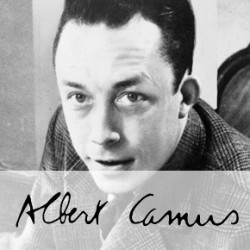 Albert Camus was born on 7 November 1913 in Mondovi, a small village located on the eastern coast of Algeria near the Tunisian border, nicknamed by its inhabitants “little Paris” and known for its vineyards and for growing oranges. At this point Algeria was part of France, and the village was founded by men and women who had come from Paris to establish an agricultural commune. Albert’s father, Lucien, was from Bordeaux and worked in a wine-cellar on a vineyard estate.

In 1914, Lucien was drafted into the regiment of the 1st Zouaves. He was soon fatally wounded during the Battle of the Marne, and died after a week spent in agony on 11 October the same year. He is buried in the military graveyard of Saint-Brieuc, in Côtes-d’Armor (Brittany), where he had been previously hospitalised and treated.

His widow Catherine Sintès – who was of Spanish origin – and two children settled in Algiers, where life continued despite their mourning. In his posthumous work Le Premier Homme, Camus recounts the fictional recollections of a son at his father’s grave. In Algiers, the family lived in the working-class area of Belcourt, where Albert and his brother Lucien were passionate about football.

Writing and activism: the literary beginnings of Albert Camus

From when Albert Camus started school in 1918, his teachers noted he was gifted, in particular Louis Germain, who helped him obtain a scholarship that allowed him to attend the Lycée Bugeaud in 1924 to continue his advanced studies in humanities. In particular, his philosophy teacher Jean Grenier left a lasting impression on the young student. In 1930, while suffering from tuberculosis, he moved in with his uncle who owned a butcher’s shop. In the spring of 1932, while he was immersed in reading the great authors of the day courtesy of his uncle’s library, he began to write and publish articles such as “Un nouveau Verlaine” (A new Verlaine), in the journal Sud.

In June 1934 he married Simone Hié, who was both unfaithful and a morphine addict, little suspecting that this union would last only two years. In 1935 he joined the Communist Party (which he left in the fall of 1937), joined the anti-facist movement “Amsterdam-Pleyel” started by Henri Barbusse and Romain Rolland and founded a theatre troupe, Le Théâtre du Travail (The Theatre of Labour). The plays that the group performed echoed the strongly-held beliefs of the future author; they performed Le Temps du mépris (Days of Contempt), adapted from Malraux, and Prométhée enchaîné (Prometheus Bound) by Aeschylus. In collaboration with the members of the troupe, Camus also wrote the banned play Révolte dans les Asturies (Revolt in Asturias), transforming the troupe into an actors’ collective.

In May 1936 he graduated in philosophy, with a thesis entitled ‘Christian metaphysics and neoplatonism: Plotinus and Saint Augustine’. His fragile health prevented him from taking his teaching diploma, so he undertook a number of odd jobs, including salesman and administrator. In 1937 he published his first work, the essay L’Envers et l’endroit (Betwixt and Between). In 1938, he earned a living by becoming a meteorology assistant and also founded a publishing house with Claude Fréminville.

The pen as a war weapon

Camus joined the editorial staff of the Alger Républicain (1938-1940), which became the Soir républicain; he then left Algeria for Paris where he joined the editorial staff of Paris Soir in May 1940. His poor health prevented him from enlisting in the war effort in 1939. However, in place of weapons he took up his pen. In June 1940, Paris Soir was relocated to Clermont-Ferrand, it was here that Albert Camus married his partner Francine Faure on 3 December, having divorced Simone. After leaving Paris Soir he returned to Francine’s hometown of Oran - there she worked as a substitute teacher and he gave lessons at private schools while attempting to form a theatre company.

Resisting the war and early success

His poor state of health forced Camus to take refuge at the Panelier farm in July 1942, which determined that he and Francine were separated until the end of 1944. During the war, he made acquaintance with Francis Ponge, Aragon and Elsa Triolet, Sartre and Simone de Beauvoir. In 1942 Camus published one of his greatest successes: L’Etranger (The Stranger). He was praised by Pascal Pia, André Malraux and Jean Paulhan, and it was the start of his collaboration and great friendship with Michel and Robert Gallimard. Mythe de Sisyphe (Myth of Sisyphus) was published in October 1942, followed by Malentendu (The Misunderstanding) (1944) and Caligula (1945). In 1943, Camus joined the network of resistance fighters "Combat", both writing and providing information.

He became a father to the twins Catherine and Jean on 5 September 1945.

Composition and publication of La Peste

"Combat" became a newspaper after the Liberation of Paris, and Camus co-edited it until 1947. In 1946, he gave a series of lectures in New York and the United States. In August of the same year, he finally managed to finish a novel that had been <span class="SpellingError SCXW308