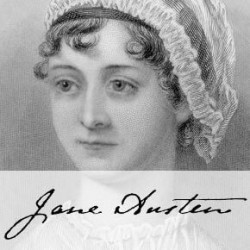 Pride and Prejudice, Sense and Sensibility, Emma and Northanger Abbey – which other author, and moreover a woman of the Georgian era, can be said to have so deeply impressed, in just a few years of writing (Jane Austen died at the age of 41), upon her era, the history of literature, and generations of readers?

From her youthful writings...

Jane Austen was born in December 1775 in Steventon, – a village thanks to her now well known – in Hampshire, an English county located on the South Coast opposite the Isle of Wight. Born into a modest but cultured family of the gentry, Jane was the seventh of eight brothers and sisters. Her father George Austen was rector of the Anglican parish of Steventon and a private tutor, who along with their mother encouraged the children to read, make up plays and improvise games. These circumstances must have stimulated the imagination and creativity of young Jane, who wielded a keen sense of observation. Consequently, this is the landscape that is later found in her fiction, the landscapes of the English countryside and its manners, as well as the cities of London and Bath which she visited occasionally.

During her teenage years, as early as 1787, Jane Austen set herself to writing. Her close family knew the importance of these manuscripts which she kept with her to work on at every opportunity, written on standard paper bought in shops near their home. Comedy sketches, prose, poetry and short stories: every genre seemingly sparked her interest. She even tried her hand at parody in the famous History of England illustrated by her sister Cassandra – the manuscript of which is now in the British Library. She would later rework twenty-seven of these texts (dated 1787 to 1793) in three bound notebooks known today as her Juvenalia, kept in the British Library in London and the Bodleian Library in Oxford. The epistolary tale Love and Freindship is undoubtedly the best known text of the set. Love and Freindship is dedicated to "Madame la Comtesse de Feuillide", otherwise known as Eliza Hancock, her first cousin who was the inspiration for the character of Lady Susan. It is possible that some of these early writings were written to entertain Jane Austen's family during evenings spent reading-aloud.

The novel Lady Susan was composed in the early 1790s, and written out as a fair copy in Bath in 1905. It is not known whether this version was sent to publishers, and whether Jane Austen planned to have it published at all. Lady Susan is considered by critics as the first major novel of Austen’s œuvre, yet it was only a posthumous success, rediscovered in 1871 in the second edition of the biography A Memoir of Jane Austen, by her nephew James Edward Austen-Leigh.

With Lady Susan, the author tried her hand at the epistolary genre, undoubtedly influenced by reading Dangerous Liaisons (Les Liaisons dangereuses) – an epistolary novel by Pierre Choderlos de Laclos that gained a cult following, possibly recommended to her by Eliza de Feuillide, who lived in France for several years (1779 to 1790)*. After Lady Susan, Jane Austen began writing Elinor and Marianne, which later became Sense and Sensibility.

* Les Liaisons dangereuses appeared in 1782 and was first translated into English in 1784.

A life devoted to literary creation

Biographical detail about Jane Austen is relatively scarce. Her sister Cassandra, with whom she was very close, destroyed part of her considerable correspondence in order to maintain her privacy. However, those close to the writer unanimously praised her calm and pleasant nature, in spite of the satirical spirit abundant in her fiction.  Despite the recurring themes in her books of love and marriage, Jane Austen remained single. Meeting the Irishman Thomas Langlois Lefroy, between 1795 and 1796  when she was twenty, is often cited by historians as a landmark event for the young woman. However, this youthful affair didn't end in marriage, which the families of the young people opposed on financial grounds. In December 1802, Jane accepted a marriage proposal from the brother of her friends Alethea and Catherine Bigg, only to break it off almost immediately. It seems that, for Jane, a marriage of convenience was an inconceivable reality.

Between 1796 and 1797, Jane Austen had finished Pride and Prejudice, which her family were delighted by. Her father sent it to London to have it published, but it was refused by Thomas Cadell – an 18th-century English bookseller who published works by some of the most famous writers of the century. Between 1801 and 1809 the family life was destabilised - they moved to Bath in Somerset, then George died in 1805. Encouraged by her brothers, who were both graduates of Oxford, the young author tried approaching publishers again, and this time Sense and Sensibility caught the attention of Thomas Egerton, who published it in November 1811. Jane Austen’s name didn’t appear to the public – the book was anonymous and publication was overseen by her brother Henry. It received rave reviews; Egerton published Pride and Prejudice just over a year later, followed by Emma and Mansfield Park. She had achieved great success, but her anonymity prevented her from achieving fame. Indeed, her novels were read to the court of the future King George IV and she was praised by Sir Walter Scott. It was only at the end of the 19th century, thanks to her nephew, that the name Jane Austen finally resonated with the public as a writer of immense talent.

The young woman began writing Sanditon in January 1817 but she never finished it. Probably suffering from a rare illness – Addison disease – Jane Austen’s health rapidly declined during the first months of the year. She died in July in Winchester, also in Hampshire. Her brother Henri revealed her identity to the public and to her readers after her death.

*Lady Susan was adapted into a film in 2016 by American director Whit Whitney Stillman (Metropolitan). Entitled Love and Friendship, it is an acerbic romantic comedy in which Lady Susan is played by British actress Kate Beckinsale.