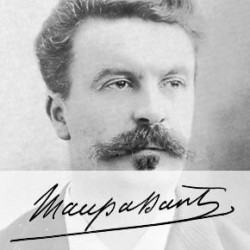 “But which are the wisemen and which are the madmen, in this life where sense is so often called nonsense and madness called genius?” And what if writers are the greatest madmen of all? This is the question that never stopped tormenting Guy de Maupassant (1850-1893). He was the acclaimed author during his lifetime of a colossal literary œuvre: six novels – including Une Vie (A Life) in 1883 and Bel-Ami (Dear Friend) in 1885 – and nearly a thousand tales and short stories, published in the literary magazines of the time and collected in volumes such as Contes de la bécasse (Tales of the Woodcock) in 1883 and Le Horla in 1887.

Under the full name Henri René Albert Guy de Maupassant, the writer was born in August 1850 at the Château de Miromesnil in Tourville-sur-Arques in Normandy, and died in Paris shortly before turning 43, in July 1893. Guy de Maupassant was born in a particularly fertile century for literature, most importantly in the years 1850-1860. Victor Hugo had published Notre-Dame de Paris in 1831, caused a sensation at the theatre with Ruy Blas and Hernani, and was writing Les Misérables (1862). In 1851, Gustave Flaubert had just begun writing Madame Bovary. Baudelaire was immersed in his Fleurs du Mal, while Théophile Gautier was deep in his Roman de la momie (The Romance of a Mummy). Were these circumstances intimidating, or, on the contrary, galvanising? Guy de Maupassant’s mother had always encouraged him towards a literary career, and Flaubert, an old friend, became his mentor. He grew up near Le Havre, in Etretat, and received an education in Rouen. In 1869, after obtaining his baccalaureate, he decided to study law in Paris. However, he was interrupted by the outbreak of the Franco-Prussian War (19 July 1870 - 28 January 1871) and enlisted as a volunteer. On his return, he settled in Paris long-term and started working as a clerk in the Ministry of the Navy, and following that was transferred to the Ministry of Public Instruction, thanks to the help of Flaubert.

In 1875, he published his first story, La Main écorchée (The Flayed Hand), under the pseudonym Joseph Prunier in the newspaper L’Almanach lorrain. This publication, followed by many others, marked the beginning of a prolific literary career which he conducted at full speed, amidst a fairly chaotic personal life that led to him contracting syphilis. He started frequenting Parisian intellectual and artistic circles – where he met Emile Zola, the Goncourt brothers,

José-Maria de Heredia, Stéphane Mallarmé… In 1880, he contributed his first short story to a volume called Les Soirées de Médan (Evenings at Médan) by a collective of Naturalist writers. This text, Boule de suif (The Dumpling), was characterised by Flaubert as a masterpiece that would endure in the history of literature.

The decade 1880-1890 was the most prolific in Guy de Maupassant’s short career. His novel Bel-Ami was an immediate success. The author earned money, travelled, and set the standard in the art of writing short stories. However, illness, loneliness and paranoia gradually took hold of his life. His younger brother Hervé died of insanity in 1889, in an asylum. Following this, Guy de Maupassant ceased writing and in 1892 tried to commit suicide and was committed to a clinic in Paris. He died there on 6 July 1893, and was buried in the Montparnasse cemetery. A monument in honour of his memory – a bust of the writer mounted on a pedestal, at the foot of which a semi-reclined woman contemplates the book she has just put down – was erected in Park Monceau in 1897, sculpted by Raoul Verlet.