Who actually wrote the Bible - a collection of sixty-six highly sacred books of many genres and arguably the most widely-read book in the world? It may seem like an odd question, but remains to be asked: written down before and after Jesus Christ, where did the Old and New Testaments come from? How did the word of God spread among men on earth?

To attempt to reach some semblance of an answer, one can refer to ancient manuscripts to track and retrace its evolution through the centuries. The Bible was originally written in Hebrew and Aramaic, then translated into Greek and afterwards Latin. The Vulgate, a translation by Jérôme de Stridon*, was the first book printed by Gutenberg in 1454 and formed the basis of the Church in the fifth century. It gave rise to numerous commentaries that would go down in the intellectual history of the West, such as that of Pierre le Mangeur**, a major historian of medieval Europe. The latter’s most famous work is the Historica Scholastica, a sort of manual of Biblical exegesis and an abridged version of the scriptures intended primarily for the clergy.

In the Middle Ages, Latin was in essence the language of scholars, which the masses – even priests – did not themselves fully understand. So that Biblical teaching could be better disseminated, translation into Old French slowly became essential.

*Monk, translator, Doctor of the Church and one of four Fathers of the Latin Church and founder of monasteries in Bethlehem.

The first prose translation in French

This first translation of the Bible, produced by Guyart des Moulins in 1297, is one of the most famous in the history of the Bible, so much so that it is called the Bible Historiale.

Historiale translates as historiated, meaning illustrated, but also historical. The Bible Historiale juxtaposes the Vulgate and Historica Scholastica, and also collects together myths and science to facilitate the interpretation of the sacred texts of antiquity.

There is therefore, a book within the book, acting as a lengthy and far-reaching commentary with sources from Eastern and Western medieval folklore to Jewish thought and Christian revelation.

‘This book is a medieval encyclopaedia. In it you will find everything there is to know about animals, plants, the calendar, the life of the Patriarchs. The life of Alexander the Great, an account of trees of the moon and sun that predict the future, the apocryphal gospel of Judas, secrets of the magic of Moses, translations of Pliny’s Natural History, two versions of the book of Job, and secrets of God’s name from Flavius Josephus – a first century Jewish historian.’ (see postscript by Xavier-Laurent Salvador) 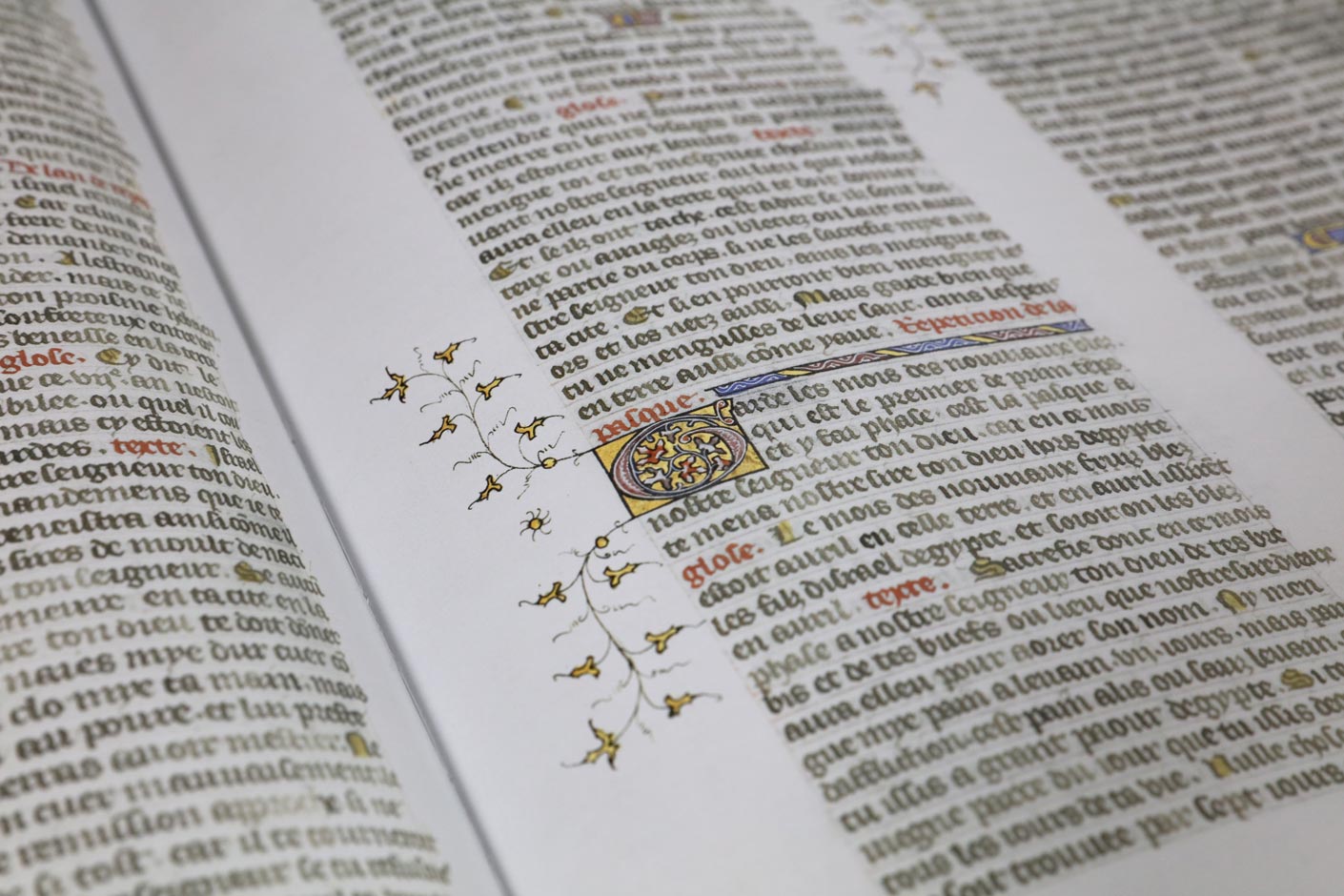 The manuscript by Thomas du Val, an aesthetic masterpiece completed in 1411

The manuscript is spread across large folios (445 x 340mm) in an exceptionally well-preserved state. With borders of floral garlands and illuminated arabesques, and crowned with richly decorated capital letters, the text opens with the creation scene. The divine figure of the Creator at work stands on a green sphere, surrounded by a deep blue atmosphere dotted with angelic figures. His right hand is extended towards the sky, his left holding a compass with outstretched branches, his head surrounded by golden rays and body clad in a white robe adorned with celestial motifs. Various scenes representing flora and fauna follow. The reader will recognise many key biblical episodes within the pages: Adam in the Garden of Eden, the birth of Eve, the Temptation, the construction of Noah’s Ark and the Flood, the Tower of Babel, the destruction of Sodom and the flight into Egypt… Just visible on the paper are the fine lines which allowed the copyist to keep his writing regular and in columns.

‘It has remained the property of the Crown of England since 1535. However, particular fleur-de-lis patterns suggest it may have been commissioned by the royal family of France.’ (See postscript) 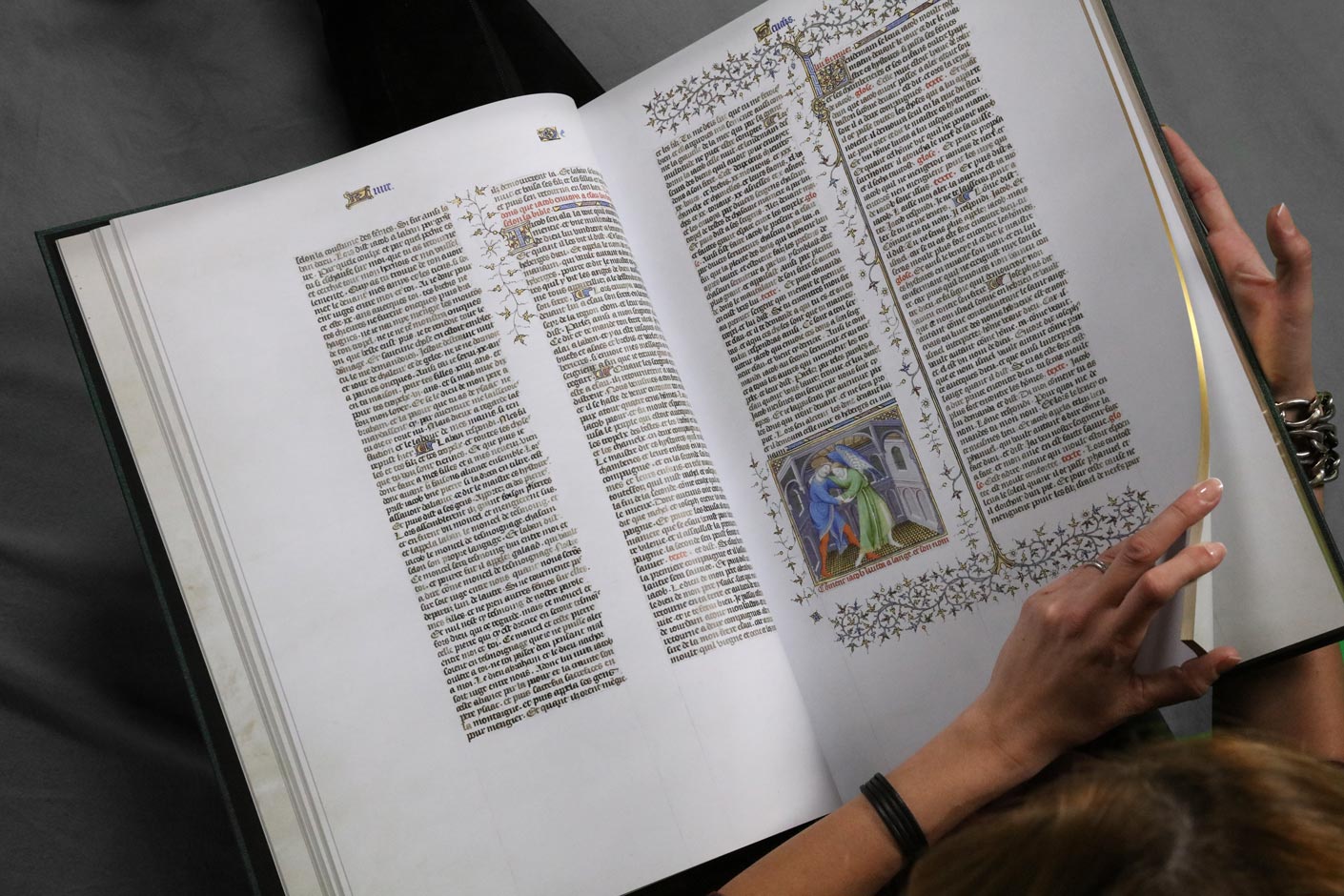 A collective manuscript, produced by the great artists of the age

This version of the Bible, copied, given commentary and illuminated in 1411, is the product of the work of several renowned artists of the Middle Ages: Jérôme de Stridon and Pierre le Mangeur (the key authors mentioned above), and Guyart des Moulins, the translator and a monk by trade. Born in June 1251 in Aire-sur-la-Lys, his death in 1322, Guyart des Moulins was in 1294 the translator of the first prose Bible intended for the people – written in French and translated from Latin.

There were two further artists that oversaw the creation of this exceptional object, which is kept at the British Library in London (MS Royal 19DIII). Firstly there was Thomas du Val, copyist of the abbey of Notre-Dame de Clairefontaine (in the diocese of Chartres), and Maître d’Egerton (Master of Egerton), the illustrator. Thomas du Val’s particular influence appears throughout the pages – he takes liberties with the original text to add several passages, inserts lines in Latin when the translation is lacking and refuses to copy down words he deems unworthy… As for the master illuminator, his real name is unknown. He probably practiced art in Paris between 1405 and 1420. Influenced by the Limbourg brothers (from The Netherlands), he is best known for having illuminated the so-called Hours of Egerton, the book of hours to which he owes his given name, belonging to the Anjou family. 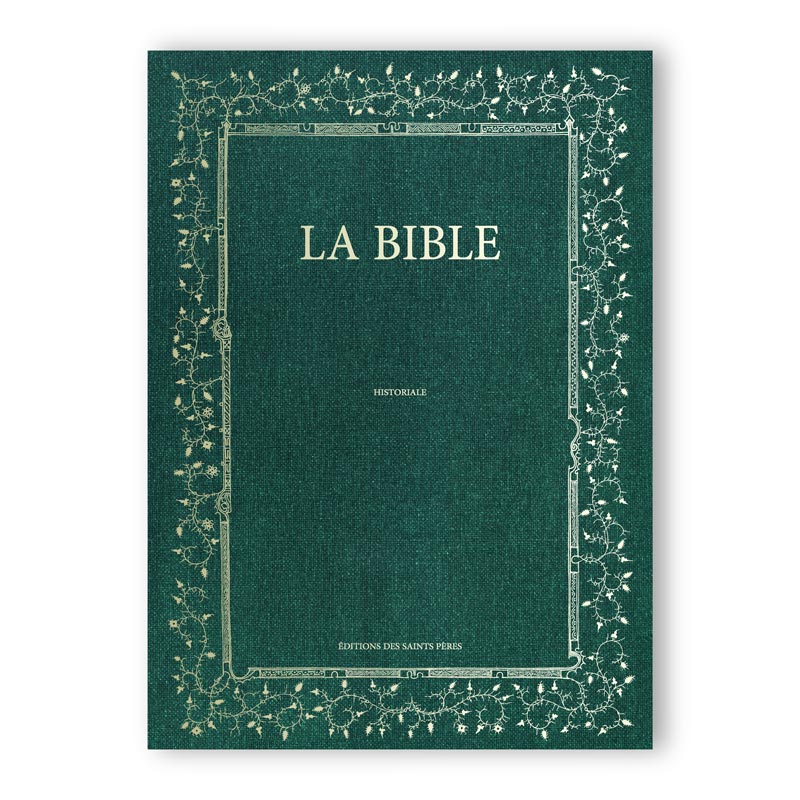 The first section of the Old Testament

This volume, part one of the Old Testament, contains Genesis, Exodus, Leviticus, Deuteronomy, Numbers, Joshua, Judges, and Kings. The next part will be released at a later date.

Accompanying the manuscript is an afterword by Xavier-Laurent Salvador retracing the origins of this Bible. The graphic restoration of the manuscript itself took more than two years to complete by the teams at SP Books. 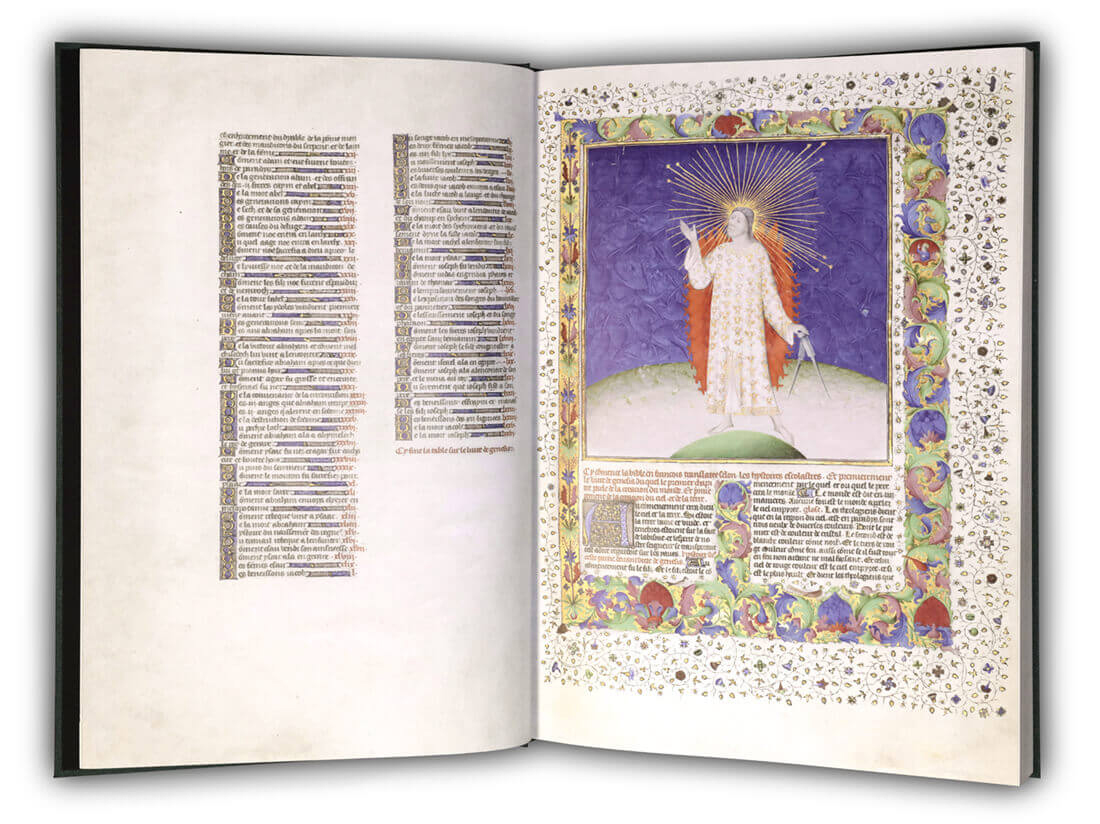 Numbered from 1 to 1,850, this Bottle green edition is presented in a large format handmade slipcase.

Numbered from 1 to 1,850, this Bottle green edition is
presented in a large format handmade slipcase.